What a day!  We woke early this morning – being 2 hours ahead – and had a great breakfast downstairs at our hotel.  I’m exceedingly impressed with this place’s service…. Even if they mixed it up a bit.  Bryan’s banana pancakes got translated as an American breakfast with pancakes.  He will try again tomorrow.

Our tour mini bus picked us promptly at 8:10 and whisked us through the already busy mess of old town Hanoi to pick up a few other people – 3 Koreans, 3 Israelis, and 2 other Asian men.   Then we drive out to the countryside.
It is hazy and foggy today.  There is some weather system just sitting around making havoc of my pictures.  Though, in actuality I wonder if it worked to our benefit as the tour route and stops were not crowed as I expected. The impending rain never came, actually, but it was a bit chilly out in the low 60s.
Our first stop was a quick potty break at a roadside “drop the tourists here” place. Surprisingly it was a small manufacturing place for beautiful embroidered artwork.  Visualize a painting of the peaceful rice paddy covered countryside but done with thread.  AND it is an employment outlet for handicapped people who are sitting their doing their art.  No pictures: they are people not an attraction. Outside were a few cute pigs and dogs and chickens that the kids liked better.
Back on the road another hour and we were in Hoa Lu; a tiny town sitting amongst giant karst hills and surrounded by water.  This was the old Viet capital during the 10th century when the Viet people were having an “off” period from Chinese occupation.  We were there to see two fascinating temples as they are all that is left. The first was created to honor the first king, who had been friends with the second king.  They both loved the same woman; she married king number one, but he died so she remarried king 2.  Well I guess that just caused chaos because the first king’s temple couldn’t contain someone else’s wife… So the city built two temples and the statue of the wife is transported between the two certain times of year. 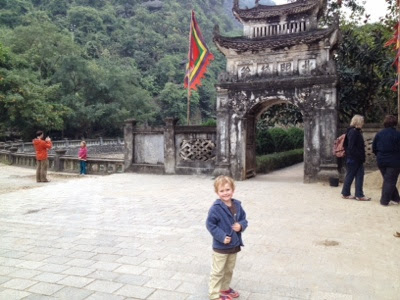 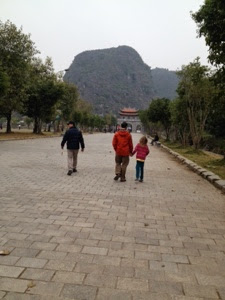 We drove on to Tam Coc.  Now this town would’ve been fun to stay in!  It was small and cute and walkable with lots of outlying area worthy of exploring on a bike.  We did get the chance to pedal some of it though!  With Zoe and Avi in metal rear seats, Bryan and I pedaled with our small group out to the fields and along a dirt track loop between rice paddys and cliffs.  It was so pretty!  I wished the air would clear the overcast away, but I suppose it was nice to not get sunburned. 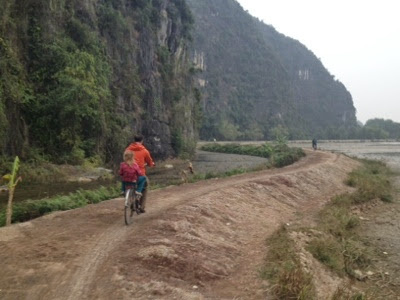 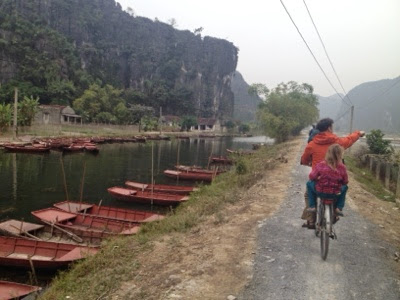 After the ride we had lunch at a local “deposit tourists here” buffet before walking across the street to the waterfront of the very wide river responsible for carving the huge limestone mountains and the caves that run beneath.  We boarded small flat bottomed boats in twos – they crammed us and the kids on one – and were rowed by a woman’s feet!  She sat in back. 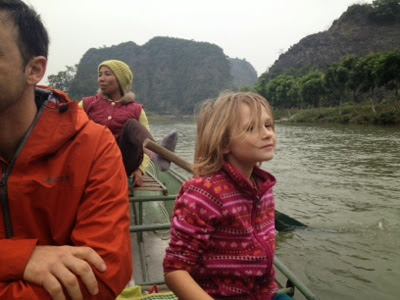 Of course it was gorgeous; again I wished the clouds would clear, but there was a misty beauty as well.  We loved the birds, the cliffs, the three cool tiny homes and gardens we passed, and especially the caves.  The river ran right through the caves!!!  The first was huge and dark and nicely warm. The kids were super stoked!  It was low enough for Avi to stand and touch the ceiling above.  We went through three caves, past more valleys, and then turned around and saw it all from the other direction!  The ride was long!!  On the return trip Avi decided he needed to be a volcano and kept exploding his hands out of his head and making that hand-lava run down me or my face. 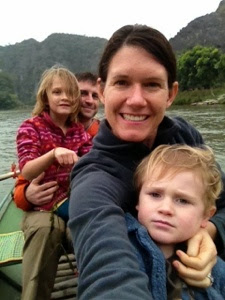 Bought some lollys from a lady selling snacks from her boat at the turnaround. 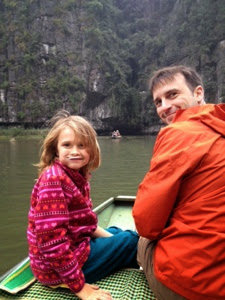 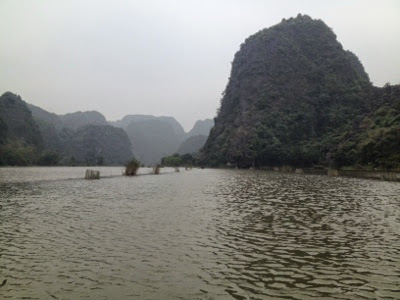 Oh and these kitty’s get to live along the river at this amazing house. 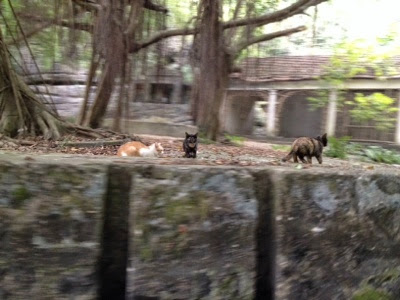 We all fell asleep on the way back to Hanoi where it was dark when we rolled into town.  Got dinner at the delicious Indian place next door and nice hot showers! 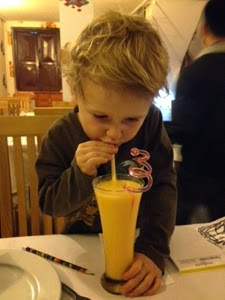 Bryan is out on walk about – he was curious to see more of the French Quarter we drove through on the way back this evening.  We came around a corner to see a small park,  tidy pretty shops and cars parked without scooter traffic.  It was Paris… And just 5 or so blocks south of us.
The kids were not up for a walk, and really me either.  I’m content to blog and stay warm.