We all slept well on our Halong Bay cruise boat last night.  I’ve found the bedding in Vietnam quite different (soft) than other Asian countries.

Breakfast was a nice buffet; I had Pho, Zoe chose fruit and toast, Avi eggs, and Bryan had noodles.
Then, up and adam, we were summoned  “please follow Chris” to the dinghy boat and puttered out to a dock perched at the base of a huge mountain jutting straight up out of the water.  We were given tickets and climbed the stairs halfway up the cliff to the cave entry.  Amazing cave is huge. 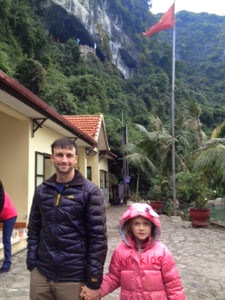 The first room seemed large, and then we moved on to another that was bigger, but the final room was gigantic… Like a city block long!  The cave also still had many amazing stalactites and a beautiful waves ceiling carved by seawater. We all enjoyed it; Avi so much he left his own mark (he had to pee, so Bryan found a discreet spot beneath an overhang). 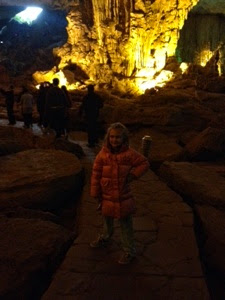 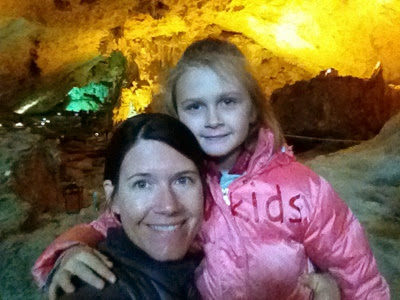 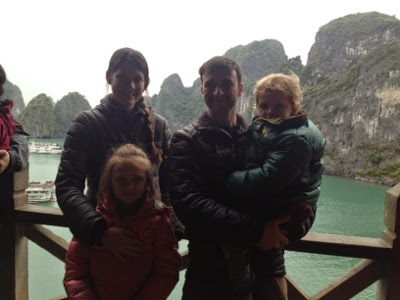 At the cave exit was a neat walkway where ladies in boats sold snacks and souvenirs.  Both kids got a souvenir!

Avi a shell and Zoe a brush. 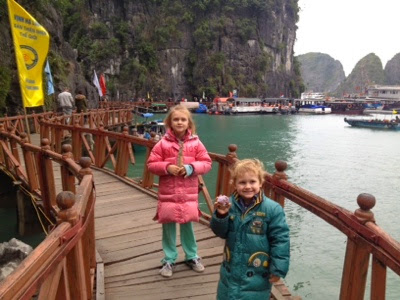 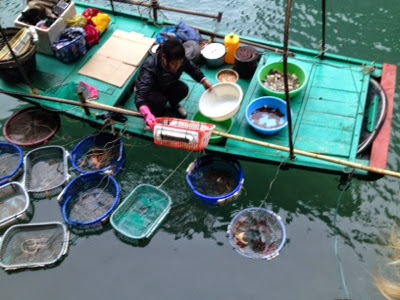 Back on the boat we had to pack out of our rooms so they could turn over for the next group.  This was a bit inconvenient  and my only small complaint would be to stay in our room that extra hour.  We played and read on deck a bit, did stickers and coloring in the dining room, watched a cooking display and then lunch was served. Avi got grumpy so our room would’ve been nice. 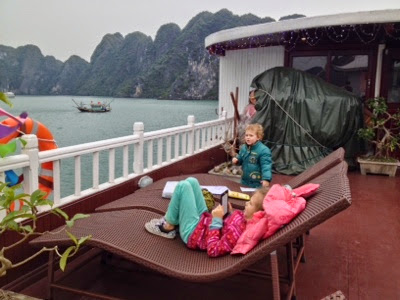 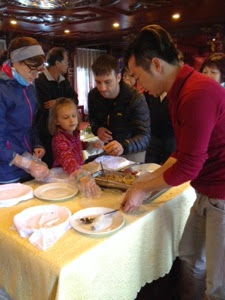 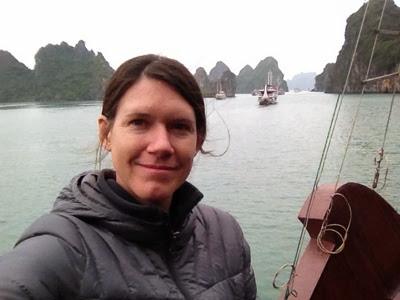 Oh well. We were soon back at the bay and ushered out to the puttering boat to the dock where we waited a bit for our bus and boarded.  Zoe, Avi and I promptly fell asleep and didn’t wake until we were at the halfway stop. It was another super touristy purpose-built place, but the bathrooms were clean.
Spent another two hours watching Avi play spaceship with his newly bought carved Halong Bay shell, and then listened to him describe how the rear cup holder of the seat in front of him was really a machine mouth that swallowed people down two throats – one for boys and one for girls. They are not permitted together because the machine gets mad about hand holding and kissing. Anyway, he was fairly self-occupied so I stared out at the rain that finally started once we got on the bus. Zoe and Bryan read I their kindles – I can’t so that on a bumpy beeping bus or I will throw up.
Back in the hotel we warmed up and watched some pink panther before heading out to the night market for some dinner and shopping. We gave each kid 100,000 Dong ( $5) to spend.  Avi got himself a shell with “Ha Long” and a boat carved on it and a cool pop up cut card with a traditional junk boat.  Zoe chose a stone-carved brush featuring a peacock and a replica water puppet. It’s always cute what they choose. Avi is sleeping with his shell. 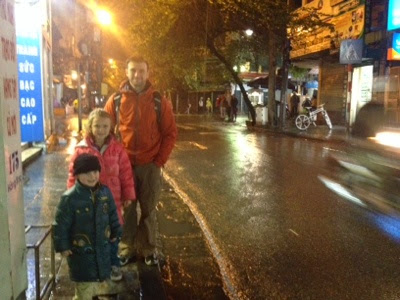 Found ourselves getting super cold and wet after shopping, so we popped into a restaurant called the Aubergine on the way back to the hotel.  Good price on delicious food, and The waitress understood English well enough to bring Avi’s fries tofu and veg out sans sauce.  It was filling and perfect to escape the torrential downpour. All for $14…. Triple the cost of street food, but who wants to eat out in the cold rain?
Now we are warming up back in the hotel.  I’m ready to go somewhere HOT!!