Started the day with a mediocre but just fine buffet breakfast included at our Rithy Rhine hotel.  Then it was tuk tuk time with our driver Wet.  He is a nice guy.

Today we tackled the biggie: Angkor Thom. This is essentially what is left of a huge walled palace grounds and the surrounding temples.  Angkor, the city itself, was made with wooden homes and even the palace was as well, but the gods’homes were built in stone.  So, that is what’s left and there are lots! 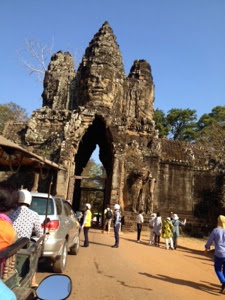 We started by getting 3 day tickets at $40 each for Bryan and I.  The kids are free.  Then we headed into Thom through the south gate.  I am overwhelmed at how much more built up the place is and how many big-bus tours (seemingly all Korean) there were clogging the road this morning.  When Zoe and I came 6 years ago it was all tuk tuk and the odd minivan-bus. Wow! 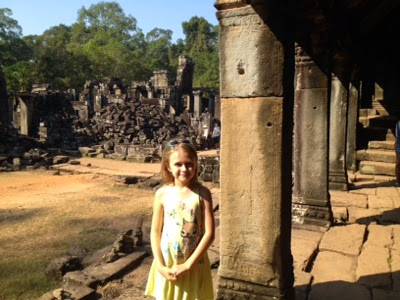 The crowds were fairly crowded at the first giant famous temple of Bayon – this is the one with the 216 giant heads of a god that really reasemble the Khmer king who had it built. It’s purpose is still a mystery. It’s full of fun passageways and courtyards and even a round temple on the top of the three levels.  Once we figured out that the big tour groups followed the “tour route” per the arrow signs we veered away and had a great time in solitude. 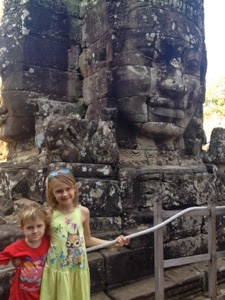 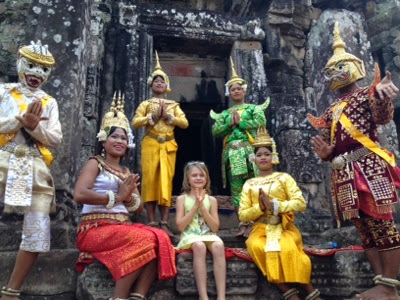 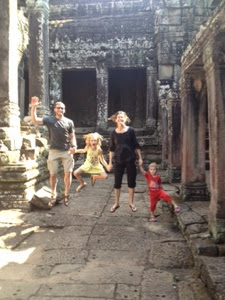 From Bayon we wandered to the Baphoun, a mostly Hindu, but also largely Buddhist pyramidal temple within the Thom grounds along a large raises walkway.  The structure is so steep they would not allow the kids!  Bryan went up, which worked wonders as the kids needed some time to mess around.  They played on the broken temple stones in the shady areas surrounding the Baphoun and we met Bryan round back after a while.  What was cool here was to see the entire rear of the temple was a giant reclining Buddha!  Bryan said the view from up top was great as well. 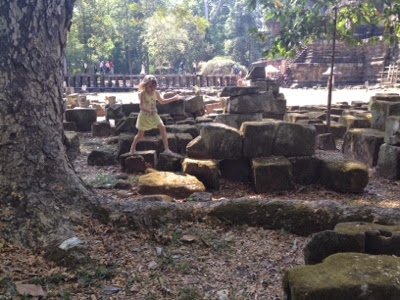 We then walked into the central palace grounds surrounded by its own huge wall.  The crowds has thinned by now and it became a pleasant stroll.  We go some lunch at an outdoor hut/stand and continued inside the palace grounds around the back and out the other side of the walled enclosure to a small Preay temple with huge trees growing out of it.  The walk was quite pleasant through a forested area with very few other people. 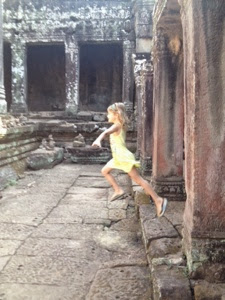 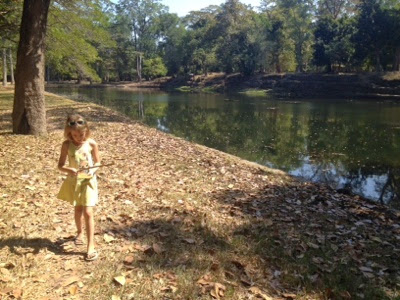 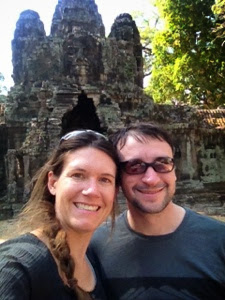 By now it was early afternoon and we were getting tired.  We finished our loop to the front of palace grounds where there is a famous wall of elephant carvings.  Wet spotted us and came zipping over.
We had him drive out the east gate for a longer scenic ride home and a stop of the gate for pictures – no giant Korean groups our here. Avi fell asleep in the tuk on the ride back to the hotel where we all had a nap and quiet time.
A dip in the pool for the kids was in order after nap time.  The pool at this hotel is great but it’s shady in the late afternoon so it was too cold for me.  The kids had a blast, though, chattering teeth and all. 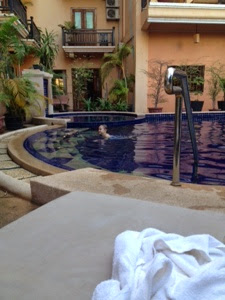 In the evening we walked to a nearby local temple on the way to the market.  We enjoyed the ornate golden grounds and a nice kitty! 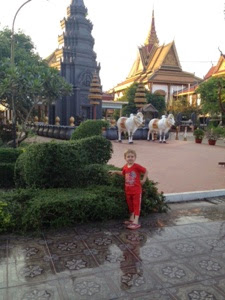 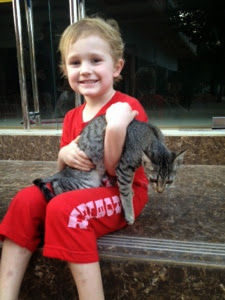 We walked into the market – it’s quite a pleasant walk along the river in town.  Not far,  maybe a km. t kids love shopping and we again gave them each $5 which goes really far in SE Asia.  Avi spent a $1 on an Angkor snow globe (talked down from $3) – he loves kitchy stuff like that! Zoe spent $1 each on an incense kit and a metal cat statue.  Adorable! 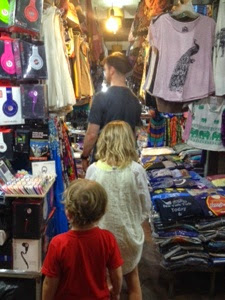 We had dinner at an outdoor cafe stand – kids got pancakes, I got something delicious with pumpkin and coconut milk and chicken while Bryan got another combo with lemongrass and tofu.  The menu at this place was huge as it had a picture for each dish! 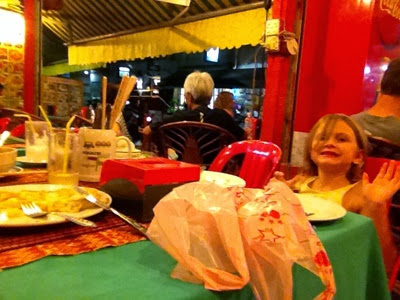 Bryan headed out to a meeting (his friends of bill w are everywhere!) while the kids and I finished out banana shakes and I paid the $11 bill. The kids and I wandered around the corner and right into a massage place.  At $6 for an hour Khmer massage we each got one!  These are a clothes-on kind of muscle massage and bit of nearly-chiro movements…  Just like a Thai massage. The kids loved it!  These places have big rooms with lots of mats on the floor and silky curtain dividers tht we just kept open between us all. Of course the ladies loved Avi.  He is so cute and was Mr. Relaxation.  Zoe took I in stride too, having a conversation with her masseuse.  It was awesome! 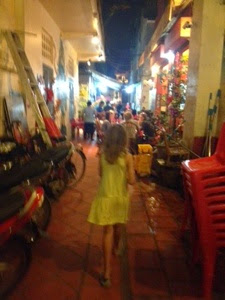 We walked up the road to a tour arranger to get our onward travel taken care of and then tuk tuked back to the hotel.  Now it’s books and bed! 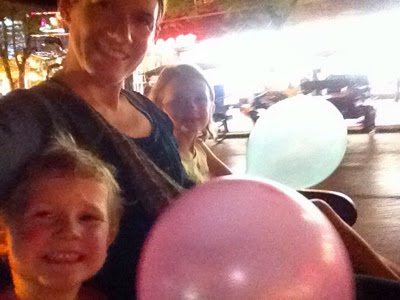