We spent our final rainy morning in Hanoi visiting the country’s most famous leader.

The Ho Chi Mihn complex had a lot of sights to see, and started, of course, with a visit to the man himself.  There is tight security with metal detectors and they took away my bottled water and gum – but stored for free. We then had to walk two-by-two along a walkway and around a block past lots of security guards to the mausoleum.
It’s a big colonnaded square building set high on its own little hill. We entered two by two in a darkened hall, around a corner and into a dim lighted high vaulted room containing Ho Chi Mihns preserved corpse.  He looks like he is sleeping in a glass coffin with dark wood engravings at the bottom.  The walkway led around 3 sides of him and then back out;  there was even a small raised walkway for kids to see while hand-in-hand.  It was hushed and respectful; he looked asleep.  The kids were silent, and later told us they thought it was creepy but it didn’t make much of an impression. No pictures allowed inside. 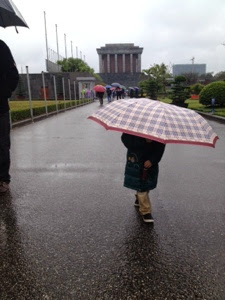 The well defined course within the complex next led us to the old palace grounds.  Here we saw a huge ornate yellow mansion that was the French Indochina colonial governors house.  It was massive and obnoxious in comparison to Ho’s small two room simple stilt home that we visited … Of course he also had a nicer home on the grounds used later in his life where he kept his fancy gift car collection. 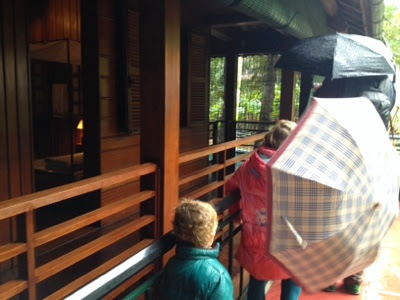 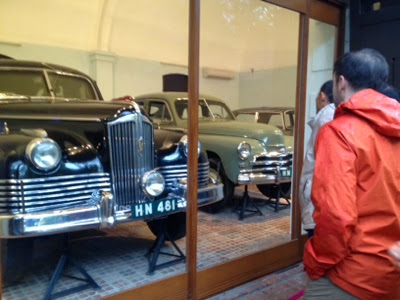 The rain started to really soak us,  so we were glad to step into the museum and find it warm and mostly dry except for the roof was leaking into a few buckets.  It was quite unique.  A modern art take on the Vietnamese fight against colonialsim and how great Ho Chi Mihn was.  It was odd enough to keep the kids interest and thankfully that kept the adult themes a bit  uneccessary to over explain to our curious kids.  Essentially we didn’t need to go into “us vs. them”.  Avi loved the “volcano of freedom from colonialism” – a brick artsy volcano and ribbon lava- and the “good vs bad use of technology” – a video surrounded by metal scaffolding that lit up an showed lots of space shuttle scenes.  Fascinating.  Zoe was curious to know names for each piece of foreign miltary equipment that was artistically displayed.
The volcano 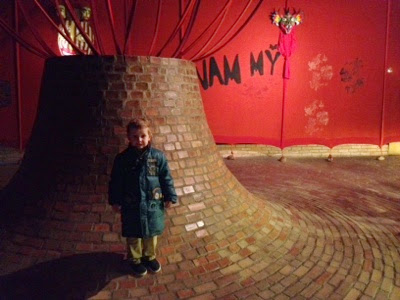 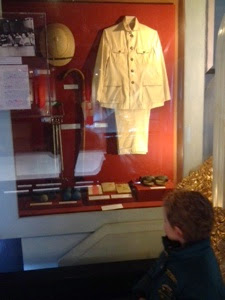 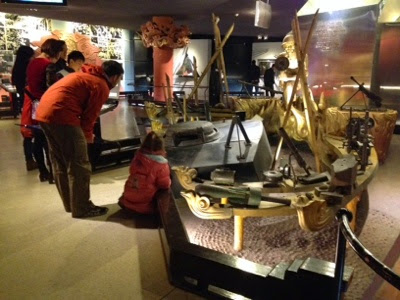 Done with Mr. Mihn, we grabbed some lunch and taxied (got ripped off on a fast-flying meter, btw) to St Joseph’s Cathedral where we caught the tail end of Mass and stayed to take a few pictures. It’s a very euro-styled place which was refreshing. 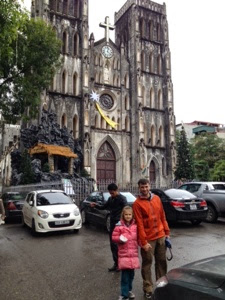 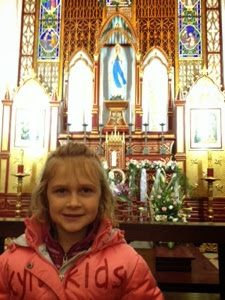 We took a fun bike rickshaw back to our hotel where we finalized our bill, made our farewells to the kind staff, and took a car to the airport where we spent an uneventful couple hours before flying off to Siem Reap. 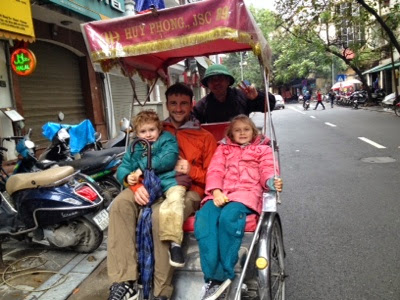 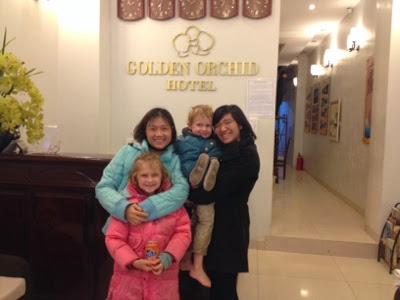 The flight was a quick 2 hours except for our too-quick descent and go-around.  A tuk tuk was waiting for us with my name and our driver called Wet.  We are staying at the Rithy Rhine Angkor which is nice if slightly outdated.  The kids loved a romp in the pool.  I’m feeling a bit like I should’ve booked at the hotel I stayed with when Zoe and I came 6 years ago…. It’s odd. This current hotel is a bit nicer and gets better reviews but I can’t help but feel nostalgic for the other place.   Mostly I really wish we could see our former driver Phearom, not necessarily the hotel. He loved little baby Zoe and it would be a tear jerker to have him see her again. I tried tracking him down, but he never replied to the 3 emails I sent; I’m guessing he doesn’t use the account.  Neither did the other hotel reply to two separate questions – which kind of precipitated me not booking there. Pool and breakfast and wifi and service in general here is nicer; bummer for nostalgia.