This was our long day in the tuk tuk. To break up temple viewing we spent today riding in the tuk tuk out to two outlying sights. 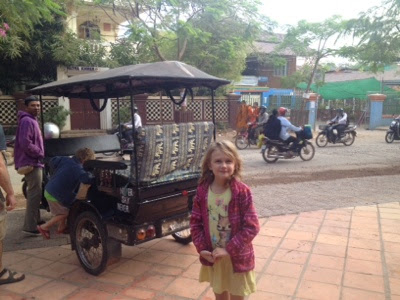 It was just under an hour to Bantaey Srei; a small gorgeously carved temple. I know it’s another temple, but it is quite different.  For one,  it’s carved from pinkish orange volcanic rock. It’s also very petite; you don’t go into it.  Of course the giant Korean tourist bus arrived around our time, but we were able to ditch them a bit by wandering the “tour route” in reverse and taking our own explorations off the track. 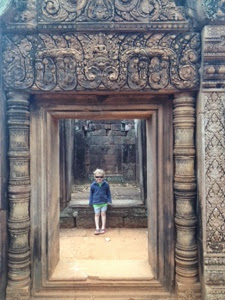 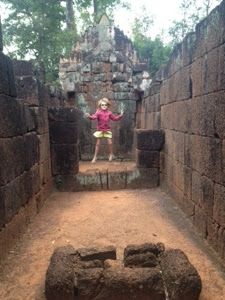 The kids mostly enjoyed the small passageways around the external wall which was just as well because they were devoid if other people.  Bryan and I tried to get them to see the intricate carvings but the novelty was lost on them…We appreciated it though! 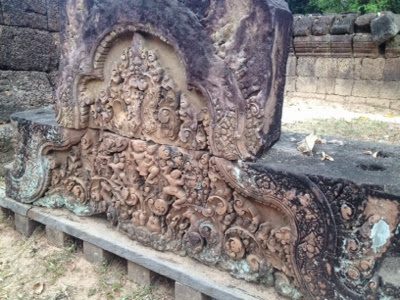 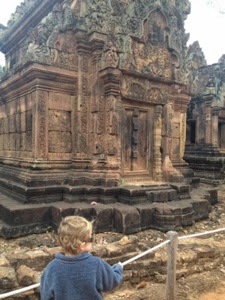 Outside the temple was a small stand setup with a landlines victim band. It’s made up of injured people who play traditional instruments for donation.  Avi really liked this; he sat patiently and listened to many songs.  He was curious about blindness and missing limbs, but mostly just liked the music. 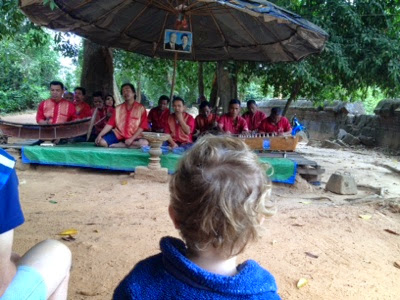 We also had a snack break before walking along a circuit trail around the adjacent wetland. It was very scenic with water buffalo and white cranes.  Plus, the sun broke the morning clouds away and we warmed up. 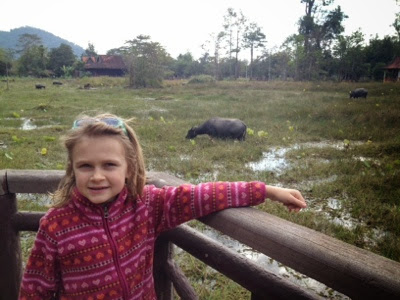 From Bantaey Srei it was another 30 minutes or so in the tuk to Kbal Spean. This is not a temple. It’s a trail to a creekbed covered with carvings…. Male phallic carvings emerging from the river – so mostly it’s like a bunch of circles.  Tips if you will. And also some people. 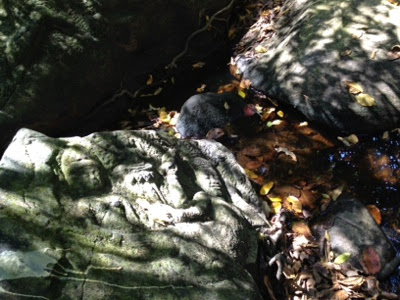 The hike was fine. We were in flip flops and the kids ran around.  I have one child who is quite adept at being physical in that way – good balance and finesse hiking on a trail.  She finds all kinds of fun hanging on vines and swinging like a monkey. I have another child whose skills lie elsewhere. Avi fell about 8 times with two big biffs with some blood leakage; one requiring a band aide and a piggy back ride. We discovered much too late that he was better without any shoes. 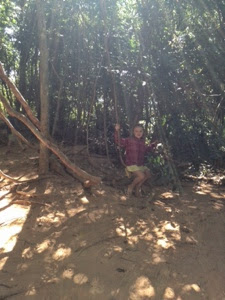 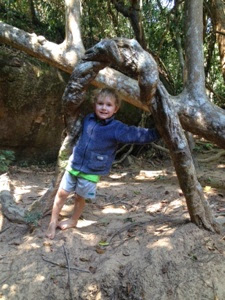 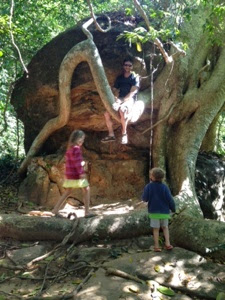 At the waterfall we all took off sandals to enjoy the cool water.  It was pretty and jungley. Nearby were some caves as well.  As usual, the walk back took half the time with barefoot kids nearly running down hill. 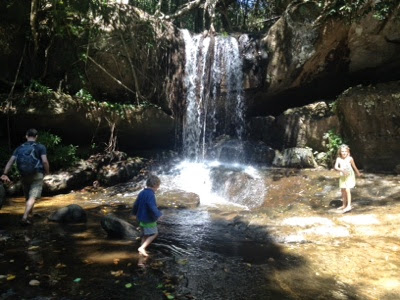 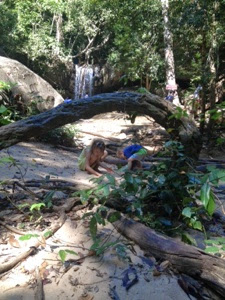 We got lunch at the open wooden food stalls at the trailhead.  Both tired kids took some relax time in the hammocks while we waited,  and then fell asleep in the tuk tuk on our return trip. 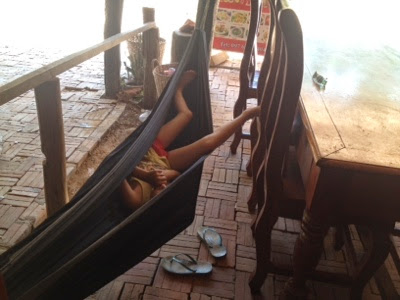 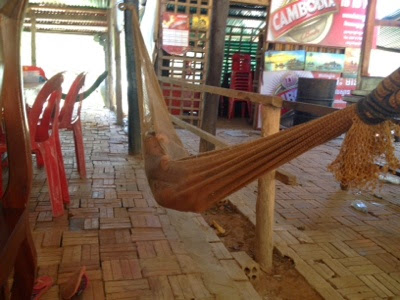 Our final stop for the day was the Landmine Museum.  It was quite informational… Lots of reading that we thankfully didn’t need because an American military veteran guide worked there and took us around.  It was sad but interesting to really learn the military history here and see how much of a problem the landmines still are.  The place is also a boarding school for local kids who  are victims… national numbers are down from 4000 a year to 100 a year, thankfully,  so they now also open their doors to kids with physical deformities. Anyway,  their main purpose is educating local kids and actual landmine finding and disarming. Avi slept on Bryan for the tour and woke in time to look at their fake minefield; a fenced area full of dangers to spot.  Zoe found the place somber; she was interested especially in the prosthetics. 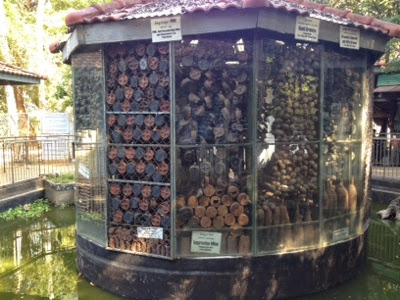 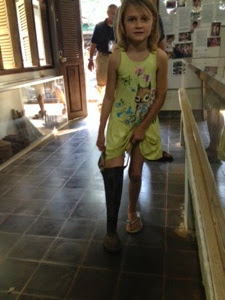 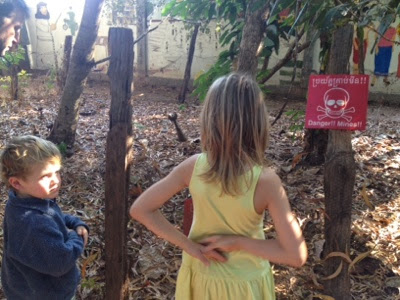 The ride back to the hotel was pleasant – back through a few stilt house villages full of kids and dogs and cows, people cooking outside, and even a dog lounging in a hammock.
Selling fuel in bottles out front. 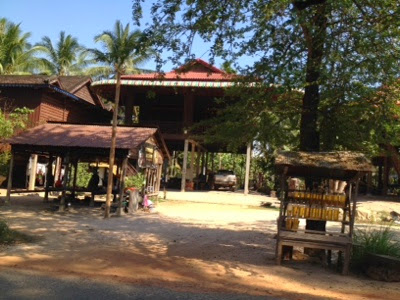 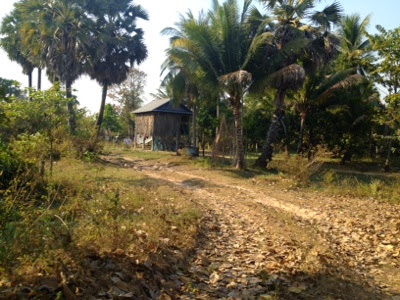 Pool time at the hotel,  followed by a warm bath, and some welcomed down time (read: we let them watch TV). 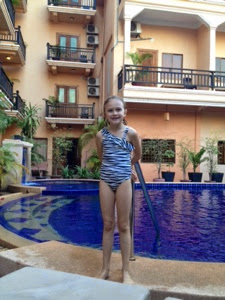 For our evening entertainment we went to a place called The Temple that has free cultural dance shows (as long as you are there for dinner).  It was nice – the food pricier then on the street but fancy and includes the show with girls dressed as golden apsaras, a peacock dance and fishing dance plus others.  Quite enjoyable. Plus,  there was even a kitty under our table; I shared a few bits of my fish, but Bryan wouldn’t let me share my empty banana lea bowl.
The restaurant is on Pub street, and as the name implies, it was hopping by the time we were done at 9:30.  Bedtime for us while the downtown turns into a big party.  It’s way more wild and party-focused than when I visited before. 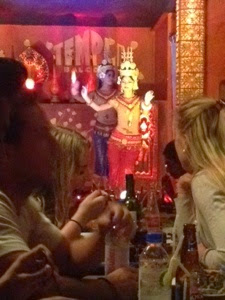