Bryan was sick all night with food poisoning… Something didn’t sit well.  So, we changed some plans around and I took the kids out.

We got breakfast and talked about what to do, and decided on an “animal tour” of our neighborhood, pool time, and followed by a visit to a playland.
After taking Bryan some toast we walked a block up the road to Wat Bo.  It’s a local wat (buddhist temple and monastery) that was built in the 900s.  It is still a very active monk school that boys from the area try to get into for the good education which includes English. We were mostly there because the temples are safe havens for animals.  There were many dogs lying around, cats wandering, and even a huge geriatric pig hobbling about.  We found some nice kitties to pet with the assistance of one of the monks. 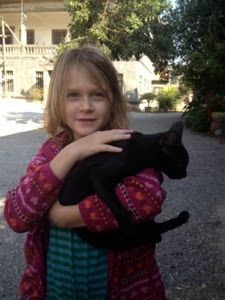 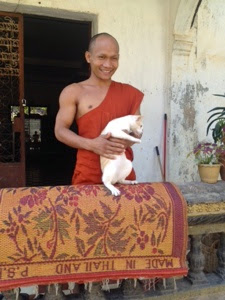 At Zoe’s request, we walked a few blocks across the river to the more modern Wat we visited a few days ago.  It is a treasure trove for Zoe – she brought a bag to collect dropped flowers and nearly filled it.  The Wats’ are not just a temple, but a walled area with grounds, gardens and many buildings as part of the monk training areas. 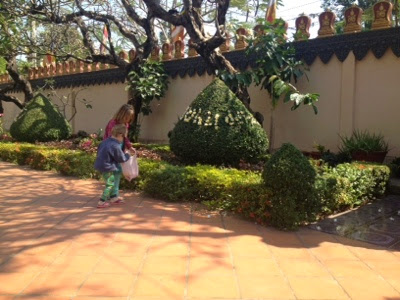 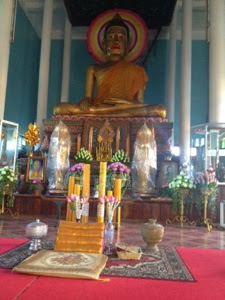 The highlight, though, was the kittens.  We were petting a nice male cat when a young mink called us over to see a mama and her tiny kittens.  The kids loved them at once and we spent a long time petting and holding them while mama cat washed herself.  The male cat even came over for more pets like one big happy family. 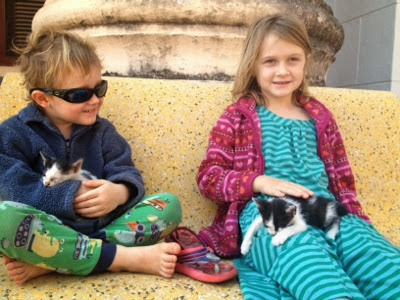 We wandered back to the hotel for some snacks and swimming in the pool while it was sunny. Bryan was up and about and thought he may join us at the playland. 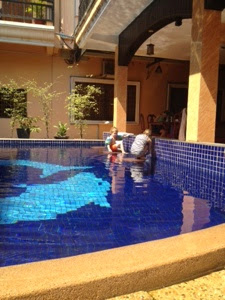 So we took a tuk tuk to a place read about – a cool playland and restaurant – that turned out to be out of business.  No matter our tuk tuk driver called a friend to find somewhere else; apparently 3 of these kinds of places have failed recently.  Had I known, I would’ve thought of something else… But the kids needed some playful energy burned.  He dropped us at the new Lucky Mall where they played for a long time. 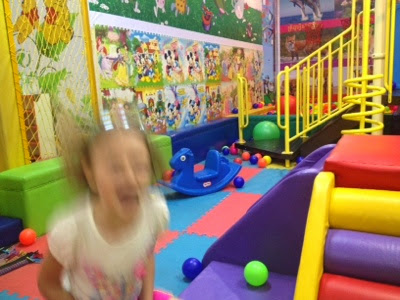 That outing was enough for Bryan, who was still feeling touchy with a headache to boot.  He and Avi headed back to the hotel for a nap.
Zoe and I walked down to the market, and I realized we were close to the hotel I stayed in last time I visited Siem Reap: with just Zoe who was 2.  I popped in to ask if our previous tuk tuk driver, Pearom, was still working there and he was!!   The lady at the desk called him and we met him outside.  He was excited to see us and we caught up a bit.  He is now a tour guide with the hotel’s new company… They have built a huge new part to hotel which is still a bit under construction.  He also has a one year old baby.  We took pictures.  It was great.  I again felt a bit bad we weren’t staying there but the place is so different now. The hotel is awesome but the area is no longer a cute neighborhood with a dirt road and small home-based shops.  It’s all very new and trendy-looking nearly like a strip mall. I much prefer the area we are staying in … For the experiences like we had this morning at the temple.
2015: 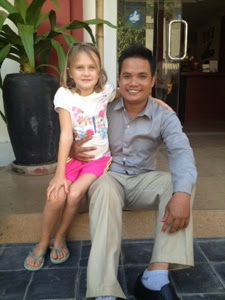 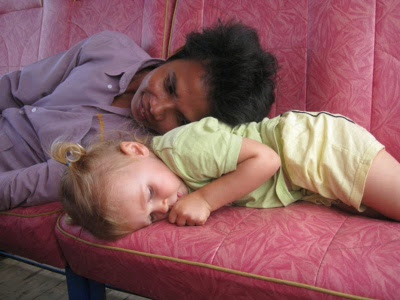 So, curiosity sated and an old friend found, Zoe and I  walked to the old market for some shopping – she got a little golden jeweled elephant.  I got a new shirt and bag.  We also popped into a grocer for some milk and fish-flavored chips for our other friends. The kittens were still wandering around the wat we pass on the way back!  We sat and fed them milk they loved, gave them chips, and spoke with the monk from this morning.  He recognized us from earlier.  We talked for a while: he is in classes over at wat bo, his name is Phos, the kitties live in front of his place, and I helped him with his new vocabulary… tough words like reflection and rush hour. He was curious about Zoe’s book (a Henry and Mudge I was surprised to find in the used book section of the supermarket).  So she read it to him. I then let him have it and he thought that was awesome as it was perfect for him to read as well… And had interesting American style quotation marks. 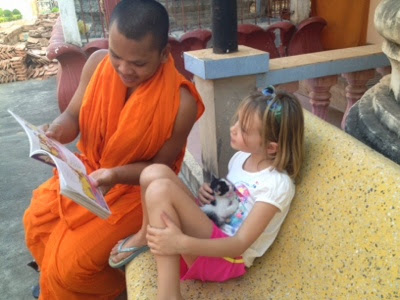 We stayed a long time playing with the kitties, even after Phos had to go to classes. They are adorable.  Mama and dad cat joined us too.  What a great evening. 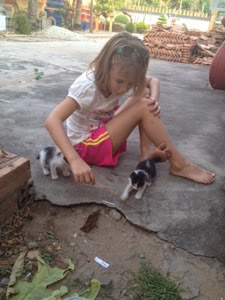 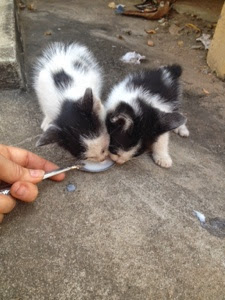 Back at the hotel we found Bryan an Avi still napping.  Zoe did her school lessons,  and we all had some dinner at the hotel. I then went out for a massage but my flip flop broke on the way!  Bummer!!  I wandered a couple blocks up the road with one shoe and gave up on finding a replacement or getting a massage. A nice hot shower felt just fine.