Today we stood in THE LONGEST immigration line ever!!  Going into Thailand from Cambodia at Poipet was insane.  It was organized but so very slow.

Our driver came to get us promptly at 7:30 this morning and we wound our way out of Siem Reap to the north.  The road was nice and smooth thank goodnes as there were lots of obstacles to go around … Giant trucks, bikes, kids, dogs, all kinds of stuff.  And he drove at 60 the whole way;  keeping the lanes as more of a notional thing.
Sadly Avi could not handle such driving and we needed to stop three times so he could puke… Once because both he and I needed a change of clothes.  Yuck! He sat with me up front.
At the border he was still so car sick he threw up in a bag twice… Once even while in line to get stamped out of Cambodia.  Luckily no one saw as the line was thick.
From there we walked down the road and into the line from hell.  It took us just over 2 hours to get past the Thai immigration.  The line was so slow moving the kids watched The Goonies.
Our handler met us on the other side and walked us down the road to our Thai driver.  The kids got some ice cream and we were on our way again.  This is another 4 hour drive to Ban Phe.  The driver was very speedy!  We had Avi sit on my lap up front from the beginning, but he still eventually got sick and threw up a couple more times before falling asleep. Then he woke when we stopped for gas and had another puking bought before sleeping again. Poor kid!!  I had grabbed a bunch of  tiny bags from the first driver (seems he was prepared for car sickness), so it was kept clean and we didn’t have to stop… Just kept the AC blowing on his face and he slept.
At Ban Phe we checked in and arranged our boat – pricier with no other people arriving this late to share – and speeded out into the water to Ko Samet.  Zoe was beside herself with excitement over going back.  We pulled up to the beach of Sametville and jumped out into the water to wade in. 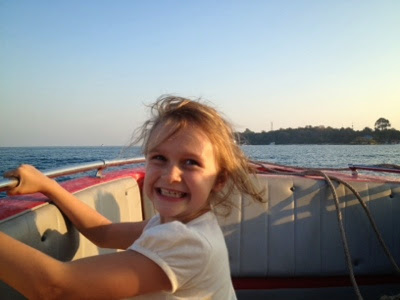 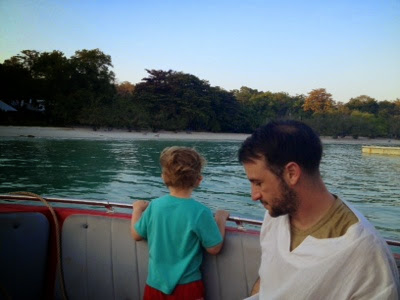 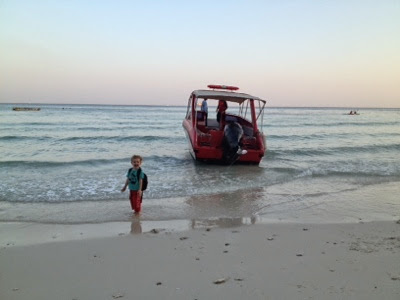 Sametville Resort hasn’t changed much – got an ATM, that’s about it.  We checked into our little bungalow in the woods and headed out to the beach for a twilight swim. Bryan took the kids out to the jumping dock.  The water was still pretty warm for being sunset. 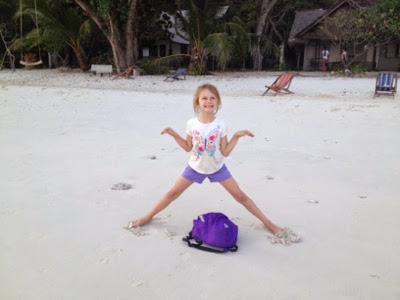 Dinner was kind of a fiasco.  We ordered food and waited and waited and waited,  watched the cool fire spinning show and still no food.  45 minutes!  Bryan asked about it and I think they forgot…. But didn’t really fess up and brought some food another 20 minutes later.  Mine was later still and poor Zoe had waited a super long time for a potato!  Ridiculous. We were just tired and hungry and mostly exhausted from waiting in lines and cars all day that another giant wait was a bit much.
Otherwise it’s nice to be back to Sametville – it’s quiet and has its own beautiful beach.  Now if only Bryan’s runny nose and my sore throat would clear up.