Waiting for an assignment has been draining me… AND it’s an exercise week so Bryan will be busy and tired, So the kids an I are on a road trip to the southern mountains of Korea.  It’s an area called Gaya.

The first thing I wanted to see was Haeinsa – a temple on my list of must-do sights since we came here.  It’s all tucked into a quiet and not super convenient corner of the country, so I’m glad we had the opportunity to come.
Our drive down was great.  Quick and easy three hours until we stopped at a wonderful rest stop for some dinner – remember Korean rest stops have cafeterias and playgrounds and shops in addition to nice potties.  After some kimbap and udon, the kids played while I perused the local maps for other sights and found some interesting museums and hot springs that may just make this area well rounded. 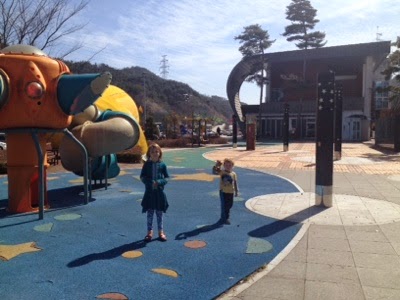 After an another hour, we rolled into the Gayasan national park and found the parking lot is1.5 km from the Haeinsa temple.  Being that we were in the car all morning, I didn’t mind the pleasant walk.  The weather was warm and sunny – even got a little bit warm in my coat.  The kids didn’t whine, and Avi spent the time taking pictures with an old camera I let him use.  It keeps him interested.  Zoe is fascinated by almost anything, while Avi is a bit pickier.  So a camera gives him the chance to focus on some details. 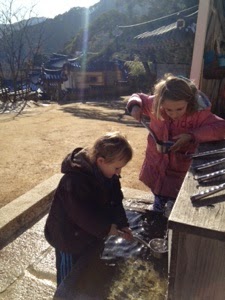 He took it seriously too, and wanted to visit every little temple hall and snap pics of statues and shrines and signs and leaves.  Zoe didn’t want to see all the little buildings; she was content to take some time meditating in the large temple.
After exploring, we walked up the steep stairs to the back of the huge temple complex to see the real reason we were there: the Tripitaka Koreana.  It is a unesco heritage site.  The three long buildings house thousands of wooden carved printing plates from the 1200s when they were used to print buddhist texts.  They were made as a gift of gratitude because the Koreans were able to fight off the Mongols. The plates are housed like a library with row upon row of them arranged on shelves up to the ceiling.  We weren’t permitted to go into the storage room just see in the windows, but they did have a fun reproduction – typically korean! – for pictures! 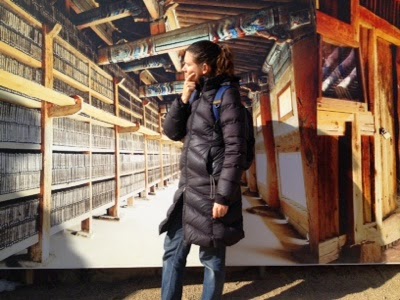 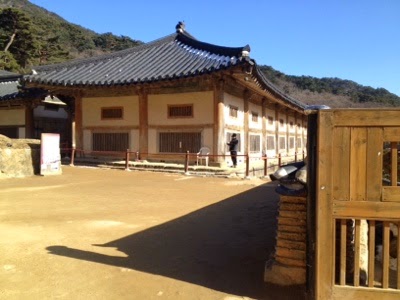 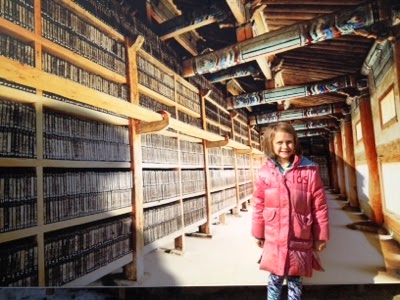 A final activity was to walk the temple meditation labrynth; which was, with the newly warm weather, a mud pit.  Oh well, it was fun and both kids were really into it. 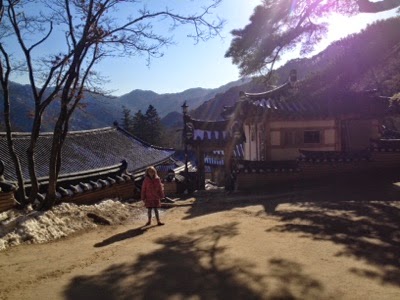 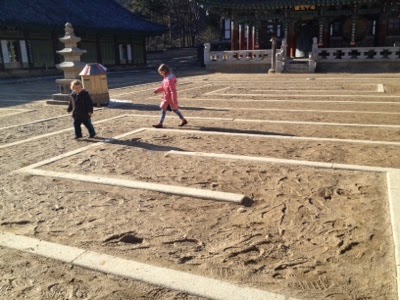 It was late and the sun setting when we made our way back to the car: the kids were troopers with that hike back down. We drove up the road a tinge to find lodging; there is always a little town in national parks but Gaya was super adorable.  I just drove around to find it full of empty hotels and minbak. Uphill I spotted a gorgeous little hanok – like a traditional korean upper class home as a hotel, and inquired of the man washing out his car.  Only ₩40,000 ?   Yes! That’s about $40, and we got a great ondol room with ensuite bath in this old place! 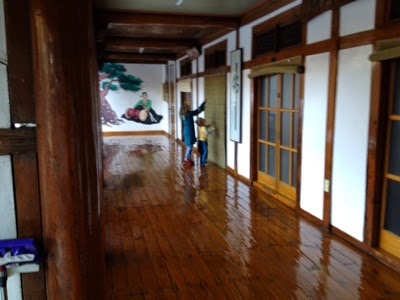 Spent the evening doing our lessons for the day, eating some ramon noodle dinner, and watching a show before bedtime. I slept like a log on the nice warm floor.
We woke to a surprise snowfall!!!  While I packed up, the kids played and tracked a kitty. 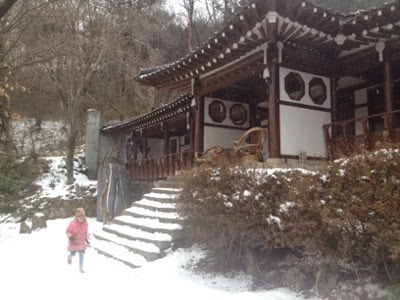 Back in the car we drove a half hour around the mountains to our next spot: the Daegaya (old Gaya) museum.  This was fascinating, and you need a bit of Korean  history to appreciate it…. Around the time of the first century the peninsula was divided into the three kingdoms period – Baekje, Silla, and Goryeo (from whence the word korea).  Around that time there were, apparently, other small holdout kingdoms – the Daegaya being one of them.  So, this museum had in it artifacts from the Stone Age occupants of this area, then the bronze and iron ages leading to the Daegaya society.  It was facinating to see how cultured and modern these people lived pre-AD!  I mean, they had heated floors, folks! 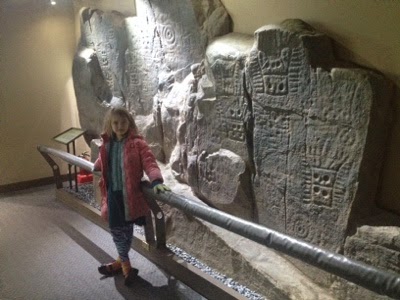 Anyway,  the Daegaya were unique in that they took mound graves to another level- traditional korean graves are mounds, but these people put their kings’ grave mounds at the top of a mountains AND buried servants and guards (maybe alive) with him.  This was very odd in korea – common in China, ala Xian etc… – and was banned by the time the Silla united the three kingdoms.
The museum had a great kid area too, that focused on the technology of ancient Koreans like pottery and grinding stones, but also had a big area devoted to printing where they got to try their hand at printing from a wood block like the ones we saw yesterday at Haeinsa! 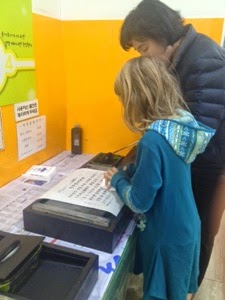 There was also a single one of these giant burial mounds left openly excavated so we could wander inside and see the arrangement of king and his pottery and servants.  Avi liked finding the skeletons, and wondered where the queen was.  She is not there: apparently she got to live and get her own mound in her own time.  Zoe thought it interesting enough to make it the focus of her journal. The royal crowns and jewelry were her favorite. 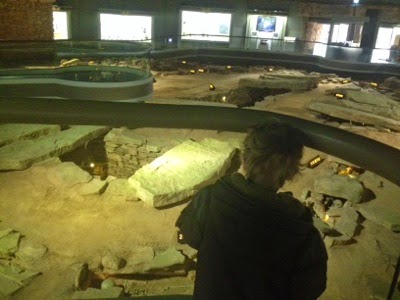 Outside the snow was really coming down in beautiful big fluffy flakes, so the kids wanted to hike around the mound loop!  I was ready to be inside, but they convinced me to stay and hike and I’m glad they did! We had a blast walking in the snow and seeing all the mounds – many labeled with their date of burial (between 0-600s AD!) 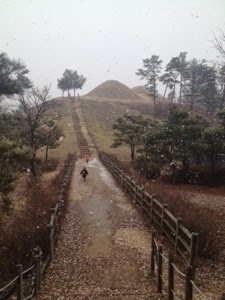 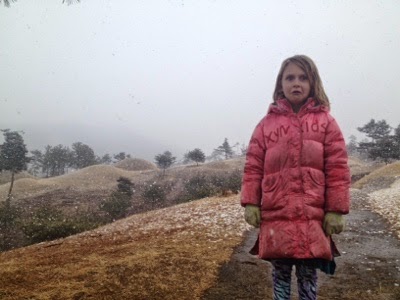 Finally cold and wet, we got in the car for a drive southward away from old Gaya and into the hot springs mountain town of Bugok. It’s really just a town of hotels – most of which have their own little sauna or spa with the hot spring water.  The biggest is Bugok Hawaii, so we went there.  It was wildly devoid of people!  In fact I wasn’t sure it was open until we entered and found a huge indoor swimming park just for us!  Took a while to find the changing rooms,  which ended up in the sauna so we went to the hot tubs first.  It was just the three of us and another lady who left after a bit!!!  I took our waterproof camera figuring it was my only chance for photos inside a sauna.  I’ll have to post those later.
The sauna was fancy and jungle themed.  It had lots of showers, a walk through cave, hot tubs and the spring water tub, plus dry sauna rooms and waterfalls.  Spent a long time before donning the swim suits and caps (oh how I hate theKorean  swim cap requirement) and hit up the pool. 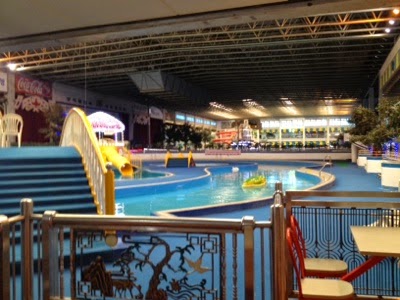 The kids first tried the big tube slides which were closed (and Avi too little anyway), then ventured into the giant pirate ship, and finally had fun playing in the kids lazy river and kiddo slides.  It was fun but the water wasn’t warm enough for me.  We spent about an hour and then finished out in the sauna again.
A final surprise was the Grand Show!  This was a wild variety show held on a huge stage between the pools.  There was talent here!  A magician, contortionists, acrobatics, hula, strength acting, and more.  The sad part was that I figured out we had spotted the tale-end of the other daily show right as we went to the pool, and they had no audience. Yet the show went on! We were sure to watch the last show of the day and had it almost to ourselves.  A group of ajumas had been dropped off – seemed like a retiree outing – and watched half with us. At the end, though, it was our own private hour long performance.  They were good! 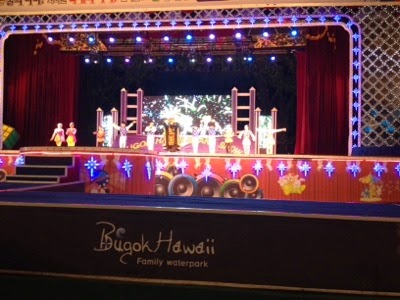 I wouldn’t say the whole place was awesome.  It was a bit old, kind of dark,  and lifeless without others, but maybe it’s  feast or famine here with Korean crowds on the weekend.  The price was right for us – the kids enjoyed it immensely and were oblivious to the “has been” vibe I got.  There is a sizeable outdoor water park and rides-area that is closed in winter, so maybe that is their bacon.
This evening we found a nice cheap hotel down the road here in Bugok. Definitely it’s off season here; an empty town means good deals on hotels!