Well, this blog entry is a bit late… but Bethany and I were finally able to venture down to the beach last week for some fun in the sun.  It was last minute, so our hotel choices were slim and I discovered that air conditioning is not a given in Europe.  Must put that on my list of ‘look for’ in a hotel here during the summer; in addition to things like a bathroom and a window that, having travelled in Asia, I also don’t consider things to assume I get in a room.  It worked out just fine, even after Zoe filled the bathroom with her hot shower steam after being told this was time to cool off.

The beaches were pretty full, in my opinion, but Bethany disagreed and said it gets much worse.  So, I suppose we lucked out that there were passing showers and ominous clouds instead of the blue sky and hot blaring sun we’ve grown accustomed to.  Less sunburn anyway.   We drove down in the evening, after POS car was fixed, passed by the bustling metropolis of Alicante, and skirting the Brit-crazed holiday city of Benidorm.  We headed to (slightly) quieter realms of the Costa Blanca in a town called Mariara.  It was cute and full of non-Spanish people; at first this seemed odd, but then we found it quite refreshing and appreciated the “Fishy Fishy” British restaurant and all the English speakers who are hard to come by where we live. 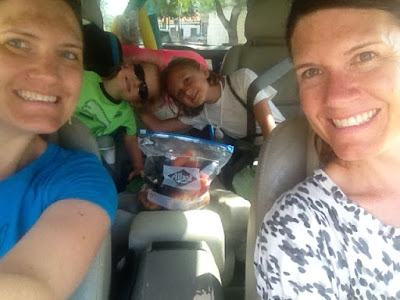 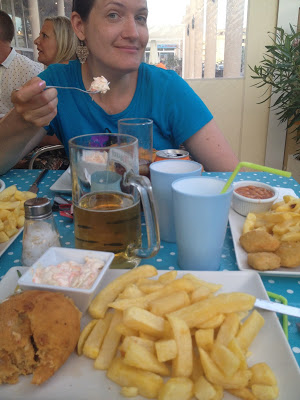 We put our feet in the ocean on that first night when the sun set… after delicious Fishy Fishy…. and then came back in the morning after our free breakfast (something else that is a special bonus at international hotels).   We claimed a spot along a little creek that flowed out of a wetland into the sand and on to the sea, and parked for the day; well for the morning.   Zoe loved the little creek and discovered the sand over there had something (?chalk, I hope?) that she could rub her hands in and it would swirl white in the water like a witches brew.  Avi simply loved to be in the waves, body boarding the waves, or making sandcastle with me.  They both tried skim boarding along the little creek with the other kids – one who was simply aghast that Avi would attempt this on a boogie board instead of the proper equipment; that kid then fell flat four times straight while Avi skimmed along on his belly just fine.  Zoe and I took a turn out on a big inflatable obstacle course where we got a bit waterlogged but had fun.  Just prior to going out we ate at the cafe to avoid a torrential downpour and Zoe got a cut in her heal from a sharp rock in the sand.  So she just hobbled out and was in a bit of pain at first, but got over it and excelled at climbing the giant rubber ‘rock wall’ and running across the obstacles while I slid off into the water.  I even launched her from a giant puffy thing.  This was like that show WipeOut. 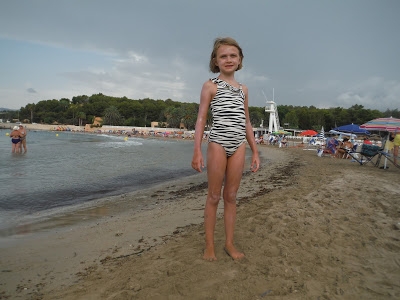 The edges of the beach 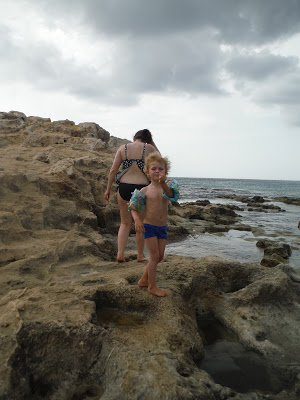 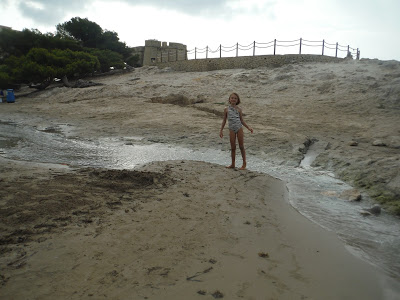 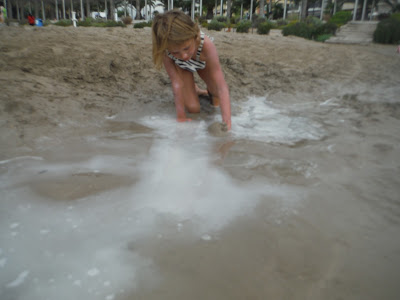 The castle we worked on 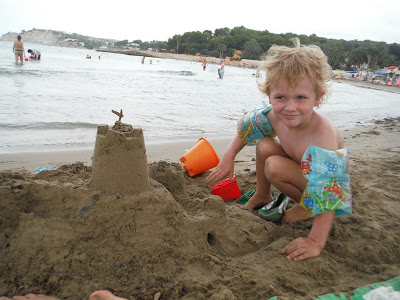 Avi out for some boogie boarding 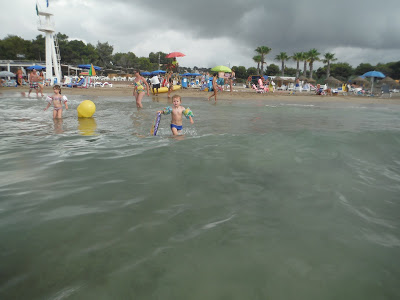 its nice having a waterproof cam 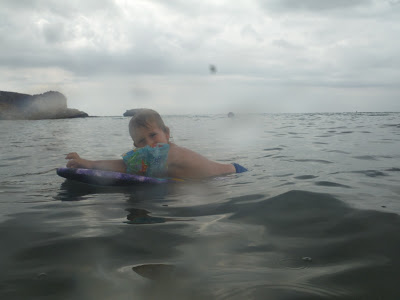 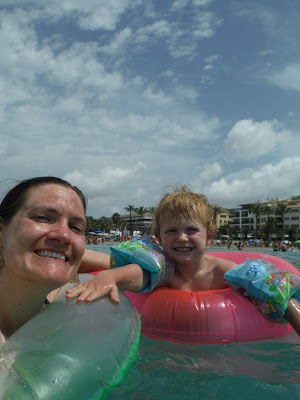 trying to skim board 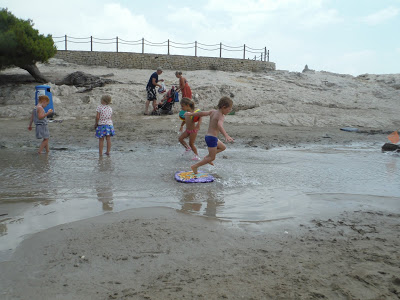 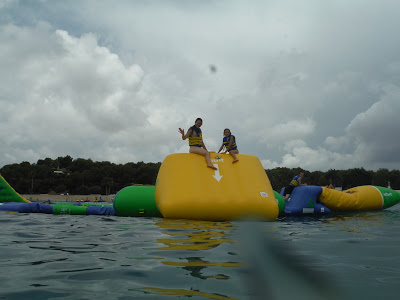 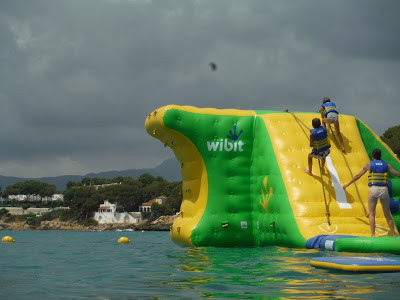 at the top (finally).  yes the camera has a dust speck on the lense. ugh 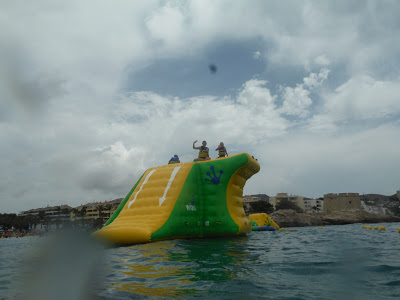 When we were all a bit sleepy, we packed up and got back in the car for a visit to the grocery for some real food and a drive up the coast further to a little stone beach in Granadella.  This was quite the drive up and down super windy roads along the cliffs that fall into the sea and past the fancy rich beach houses that are perched along the edges.  It was like the Hollywood hills, but Spanish and near something cool.

Bethany and the cliffs 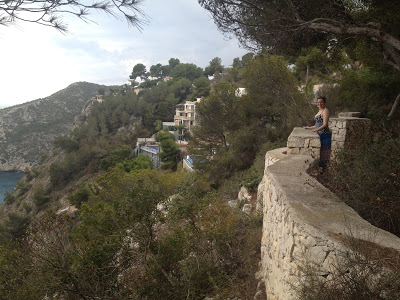 The beach was just clearing out a bit as we arrived and, luckily, a rainstorm sent home all but a few of us hangers-on.   Zoe was sleepy and rested under our umbrella while Bethany sunbathed and Avi and I went for a swim.  The waters were pleasant and very clear blue, and it dropped off nearly right away at the edge.  We made our way out to an empty floating dock to chill out and see if we could glimpse around the headlands.  The beach was tucked away between two giant cliffs that made a natural little marina.  Apparently we looked inviting because about 20 other people decided to join us on the floating dock and took over.  Avi and I floated back in , ate some food, walked along the cliff -bottom trail and then it seemed we were all ready to go.  It had been a big day.

the pebble beach meant no sand up crevaces 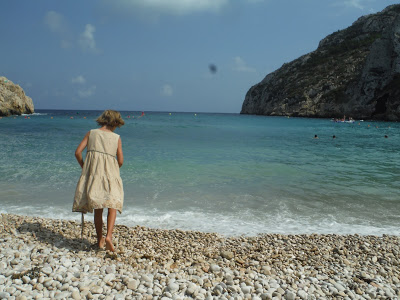 um, he wanted to pose for this one 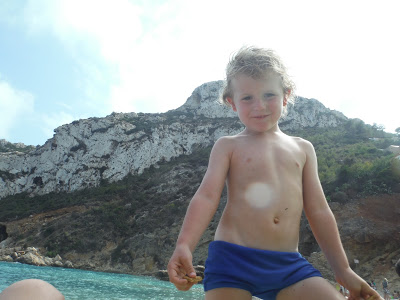 out on our little trek along the cliff 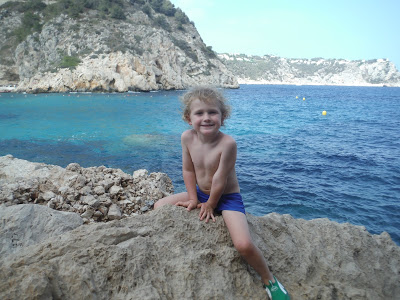 the beach.  not too big! 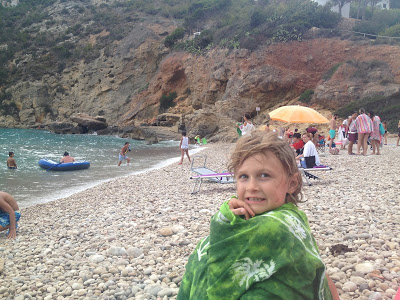 Bethany in the water 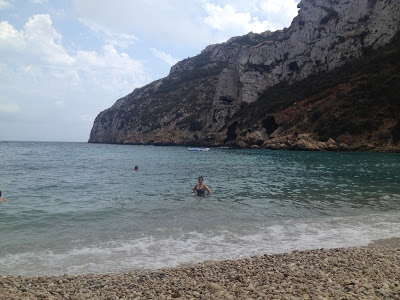 there it is… just before we left it got a little busy again, but not packed