“I see Don Quijote!” My kiddo yells.   It’s yet another statue of the famous lanky knight here on the plains of La Mancha, where traditional windmills called molinos still stand on dusty hilltops waiting to be conquered, where rivers roll down canyons past lazy cliff top villages, and where most tourists speed past.

I’m standing where Rocinante, the horse, and his feeble minded owner, Señor Quijote, battled the windmills; at least that’s what they say. It’s a story loved with such passion that I get the feeling the locals take it for history. Mostly, there is farmland stretching to the horizon; vineyards and olive groves punctuated by the occasional windmill-topped hill and not much else but dust.

The province of Castilla-La Mancha is in the center of Spain, and between the mostly open fields are villages that don’t make their way into guidebooks. My family and I have come to ride the Ruta de Don Quijote; a well-marked, but poorly documented multi-use trail network that webs its way around the interesting sights and historical enclaves of central Spain. We began the ride mid-morning at the Ermita del Cristo de Villajos. It is one of the numerous regional standalone churches whose surrounding medieval villages have dwindled and depopulated so as to leave them solitary since the 1500s. The 5km section went quickly on a route that felt mostly up hill. 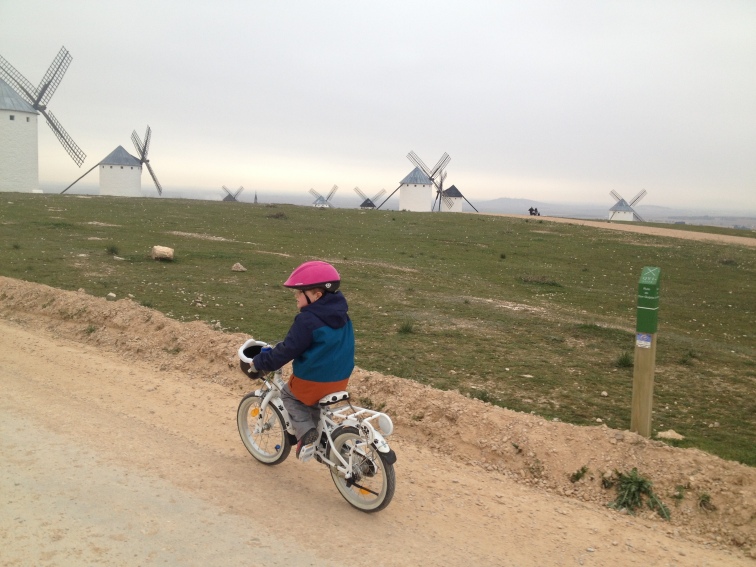 “Can we get an olive tree?” asks my 9 year old daughter as we pass through a grove.

“Look they still have olives!” She squeals and pulls her bike over for a better look. Sure enough, last years’ leftovers are still dangling, black and juicy, between silvery green leaves at the end of gnarled old branches. All around are piles of recently pruned debris ready to be burned and returned to the earth; it’s still very much the same it has been for hundreds of years.

When we break, the kids are set free to run around nine 300 year old white squat windmills: the molinos above the town of Campo Criptana. The view is far reaching and the photos are great; it’s the perfect place to stop for our packed mediodía (mid day meal) of crusty rolls, jamón, and local manchego cheese. These are the famous giants that roused Don Quijote into a fervor; or at least they might be, as could be the ones we see in the distance on the next hill near, or further on at Consuegra, or perhaps those we passed at Mota del Cuervo near the town of El Toboso from which Quijote’s beloved Dulcinea hailed.

In Toboso you can even visit the house of Dulcinea which has recently been remodeled in time for the 400th anniversary of the publishing of Don Quijote de la Mancha. The local attitude has raised the publication from the level of fiction to myth.

Miguel de Cervantes knew this area well. Born in 1547, Cervantes’ fame as a writer was a long time coming. He struggled with finances much of his life, joined the military to fight the Turks, spent years imprisoned in Algiers, and found himself back in central Spain working as a grain collector for the Spanish Armada. The job meant much travel around the farms of La Mancha. Twice he was imprisoned for mismanagement, and local lore holds that during his imprisonment in the nearby Argamasilla de Alba, Cervantes began writing the legend of Don Quixote. You can even visit the little cave cell and see an empty wooden desk as if he’s just gone off for some vino. 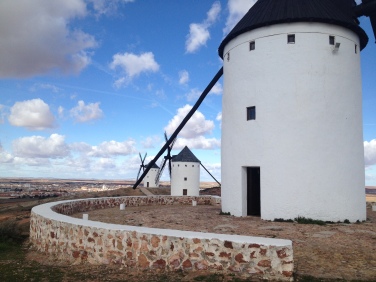 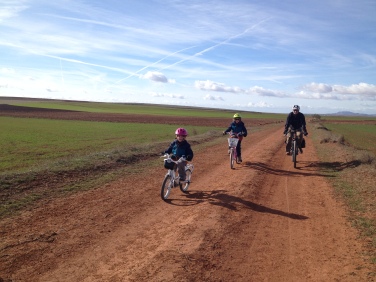 For us, the next goal is pedaling to the town of Alcázar de San Juan; it’s 10km away and the kids have begun to notice the monotony.

“We only have to get to that next town. Do you see the windmills?” My distraction technique doesn’t work. I suppose his single speed bike is forcing those little 5 year old legs to go around at a much more intense rate than mine. He and I stop and rig up a little tow rope from a bungee cord in my basket. I start to call myself Sancho Panza carrying my master’s load.

The next molinos are impressive. They stand alone on a singular hill with expansive views. One of them is a small museum about local agriculture, and a second is used to display the original mill mechanisms inside. It’s all quite fascinating, but we ride on.

Alcázar de San Juan has its own claim to fame as the as the birthplace of Miguel Cervantes. They have a certificate to prove it on display at the rear of the Parroquia de Santa María. Another town much further north makes the same claim with a bit more backing. Regardless, Alcázar is a wonderful town to walk off some bicycle butt, take in the remnants of a Moorish castle wall, and join the locals as they emerge for dinner at 9pm. Oh, and see yet another Quijote statue.

In the morning, we finish our bike tour by looping back to the Ermita via some local dirt roads. The Ruta de Don Quijote is marked for its entirety by small green posts emblazoned with the windmill symbol. The route is a complex rambling of trails that crisscross Castilla-La Mancha in no seemingly sensible way, with no beginning or end, and such sparse online information that you simply must go in order to do it. The whole lot will make sense once you are on the trail; a fitting tribute to The Ingenious Hidalgo de La Mancha.

Backside of the map:

Blog of my route with GPS coordinates: