While in Greece, the kids and I took what turned into a 6 hour train ride north from Athens into the gorgeous mountain town of Meteora.  The day didn’t start ideally.  The Athens subway was unexpectedly non operational, so we ended up walking couple miles through the dodgy parts of town up to the main train station.  It wasn’t so bad, a sunny morning, and a great pre-train workout.  I was just a bit of a mess worrying about timeline.  Just as Avi started to really get sore feet, we made it to the train station and our train pulled up a couple minutes later.  Perfect timing!  Or dumb luck. You choose. We found our compartment and lucked out with no companions!  Yippee for 2nd class; 1st was packed.

The train ride was well spent listening to audio books, staring out the window, and doing schoolwork.  Trains are a blast; both kids really enjoy even long rides. 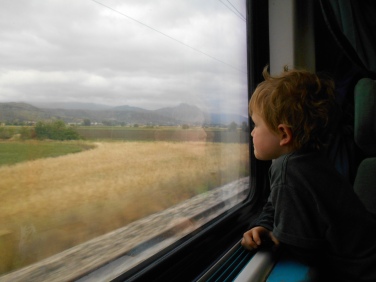 When we got to Meteora an hour late, it was an easy walk to our hotel.  It was perfect for us; goddess statues, ornate railings, and even some dioramas in the sidewalk.  The cheese made the two kiddos think we were at a super fancy place;  I was pleased with the view of the mountains! 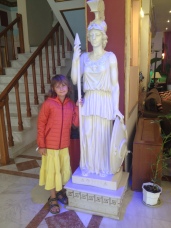 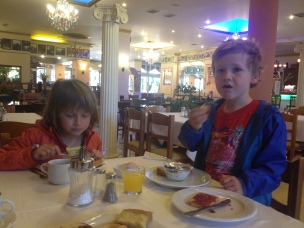 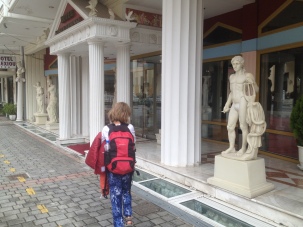 That was where we headed first!  Not wasting any time, we hopped into a taxi that took us to the first of six cliff-perched monasteries: St. Stephens (Agios Stephanos).  With a few moments to spare until it opened for the afternoon, I bought the kids some pretzel sticks which they promptly spilled.  I bought another pack.

In the monastery Zoe and I used the available skirt wraps to cover up our pants.  Kids are free to enter, so I only needed to pay my 3 Euros and we had free reign to wander around.  There are parts of each monastery not for public viewing, but these are well marked and fenced off.  The kids beelined it to the back patio where there were some adorable kitties and a gorgeous view of the town, Kalambaka, below. We also enjoyed seeing the inside of the sanctuary, but there were no pictures allowed.  It was a very ornate, gold gilt, and colorfully painted place.  We had fun just sitting in silence looking for gory pictures; it was filled with saints and martyrs in action. 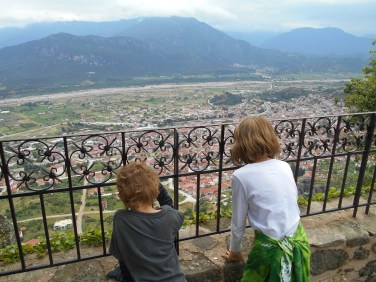 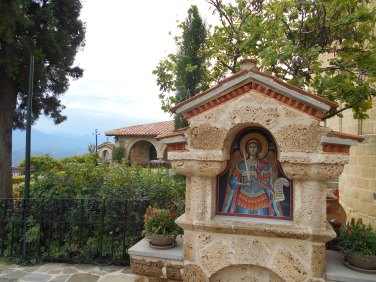 From St. Stephens we walked up the road to the next monastery on this ‘side’ of the mountains: Holy Trinity.  This one is incredible looking, perched on top of a spire. We needed to walk up a bunch of stairs built into the cliff and through a tunnel to the entrance.  As with all the monasteries, we put on our wrap around skirts, I paid my 3 euros and we wandered in.

I later asked the kids what their favorite part of visiting Meteora was.  Zoe said the hike down from Holy Trinity.  Avi said, “the mona streees.  They were so beautiful.”  He is right.  They were so tidy and gorgeous and surrounded by beauty. Holy Trinity was also a fave as we each got a Greek Delight on the way out!  Yummy! 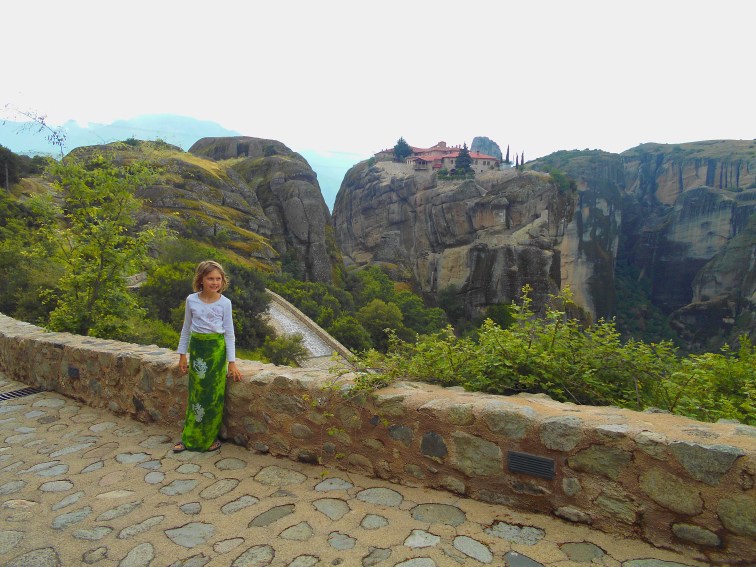 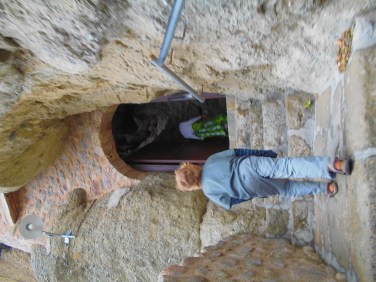 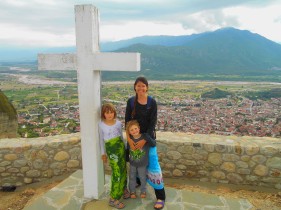 A well marked trail goes back to Kalambaka town from Holy Trinity. It was quite a pleasant hike and such a wonderfully sunny day, we stopped halfway for a snack and drinks.  Zoe found a tortoise;  she also fell off the rock we were snacking on.  Not far, about 10 feet to the river bed,  but still far enough to make her nervous.  She slid down feet first, so no injuries beyond pride.

In town we wandered toward our hotel and found a great outdoor café along the way where I got some dolmas and falafel and the kids got souvlaki as we’ve had daily. 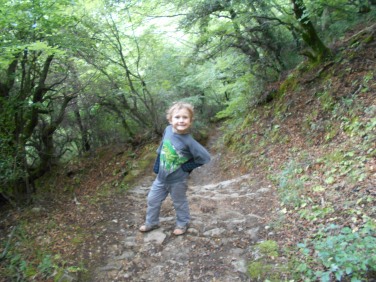 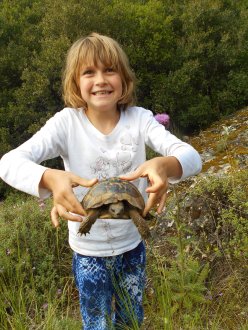 Next day we were up early enough to enjoy breakfast at the hotel, check out, and store our bags before endeavoring on a long adventure.  Opposite the hotel the local bus came on its first of three daily runs up to the Grand Meteora.  This is the biggest and topmost of the monasteries.

Not only did it have the chapel sanctuary to visit, but also included some small museums; one with artifacts about the monks’ help  during wars gone by, and another with some beautiful artwork on religious items and illuminated texts.  To get into the monastery we had to walk down and then back up about 300 steps.  The monks, however have a steel cabled trolley of sorts that they can use to go horizontally over the big chasm straight to the parking lot.  We were excited to get to watch it go. 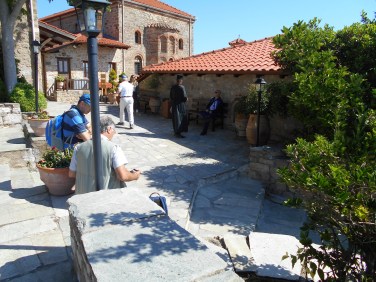 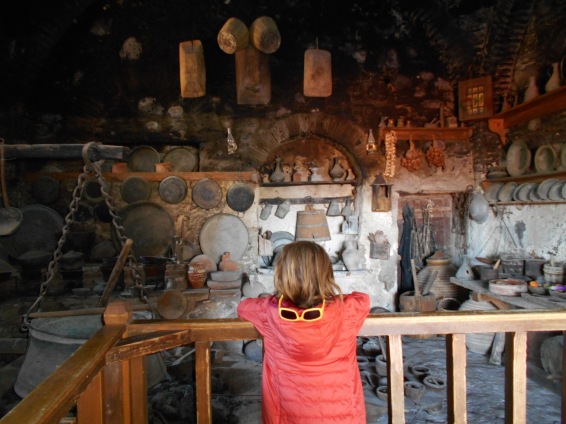 We spent a long time at Grand Meteora and then walked down the road to the next monastery: Varlaam.  Again, it was pretty and the view was awesome.  This was super cool, though, because they were doing some construction repairs and using the old winch pulley to haul loads of stone up the cliff face into the monastery.  There was a small food truck sitting outside in the parking lot, so we got some little sandwiches for lunch and continued down the hill. 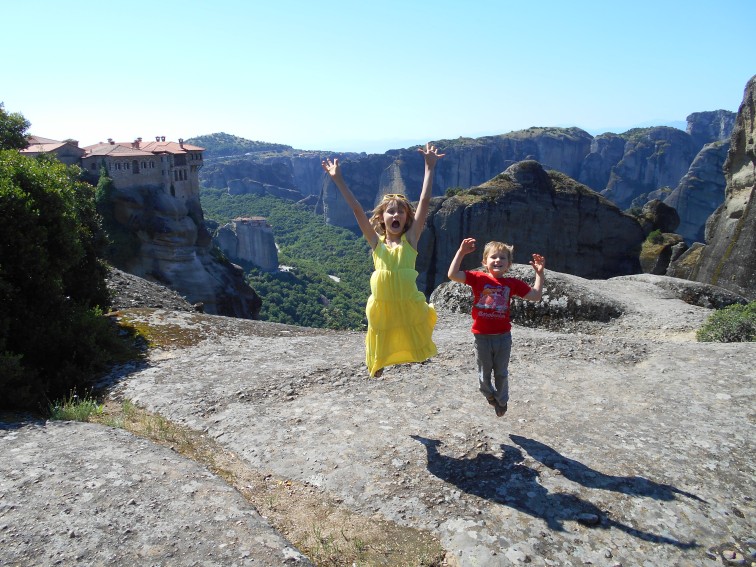 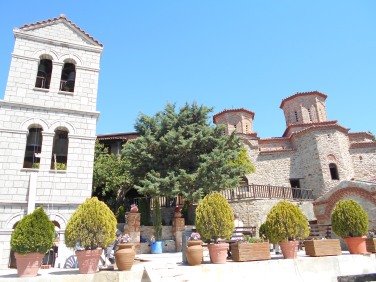 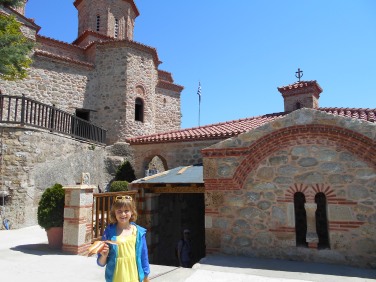 From here it was a pleasant walk down, along the road still, to the next monastery.  The road isn’t super traffic most of the time, but when there is a bus then it gets a bit annoying with a backup of cars behind it.  Not bad, though, and the sun was out.  Walking down, instead of taking a bus tour, was not only cheap (free!) but it let us stop at every little lookout for pictures.

The next stop was Roussanou, which is the only nunnery on the circuit which made it extra interesting.  We have been seeing only bearded, black cloak wearing, monks to this point.  Zoe noticed the large number of pretty flowers at this one, and figured it was because of the nuns instead of monks.  There were also a ton of adorable kitties that hung around waiting to be petted! 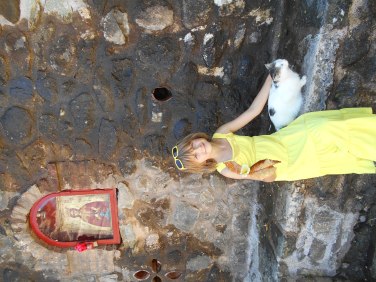 Back on the road we walked down past a giant switch back and were finally able to get on a hiking trail, which was quite pleasant.

The final monastery was called St Nikolaos Anapafsas.  It was small and enjoyable because we were the only ones there.  The kids were excited we had been able to visit every one of the monasteries; I wasn’t sure if we would’ve been able too!  Of course, the big draw for the kids at this one were the plethora of caterpillars to carry around.

The trail continued down into the little village called Kastraki.  We had hoped to stop for ice cream or something here, but it was mid day and like in Spain all the little convenience stores had closed up for a few hours.  Poor timing for us, but we did find a great playground behind the church – I was shocked the kids had energy for it – and filled our water bottles at the public fountains.  All the monasteries also had fountains of water that were nice for refilling.

The walk back around the cliff to Kalambaka was not long, but felt like it.  We were tired at this point, though it was flat or downhill, so still easy to walk along.  We even passed an abandoned cave monastery.  I guess the area used to be full of them.

Just when kids hit max capacity for walking, we strolled into town right to an open kiosk for some ice cream.  Yumm!!  We also stopped at a cheapie souvlaki place for some takeout in preparation for the train ride back to Athens. I treated the kids to a soda each; it was a big deal to them.  They had walked about 8km today, plus hundreds of stairs up and down to each monastery; most were between 100-200 steps. 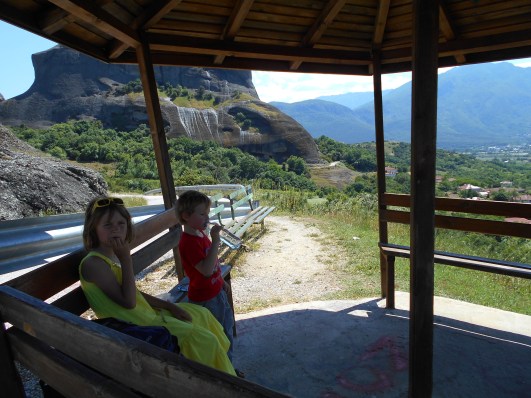 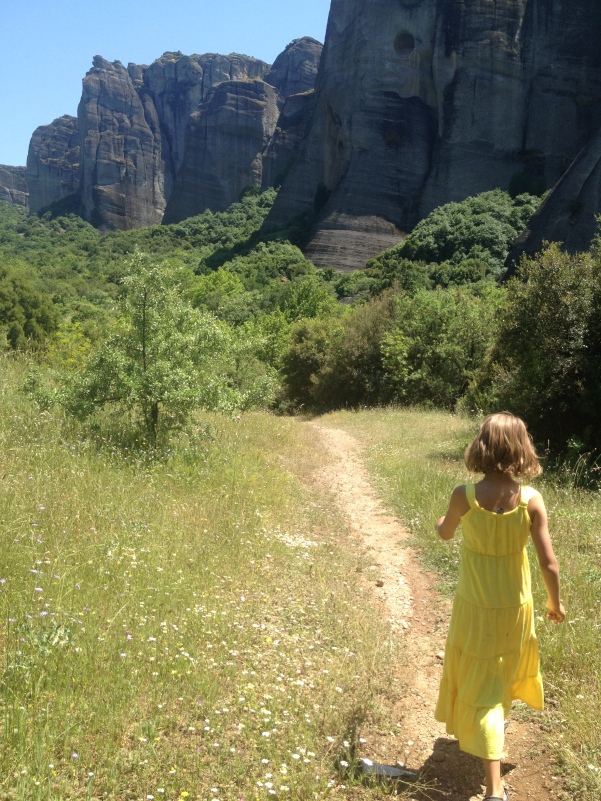 I retrieved the luggage from our hotel and we walked to the train station a few blocks away.  The train ride back was at 5:30pm.  We did a lot in our day!!  Unfortunately, the train was again late, so we rolled into Athens about 11:30 and still had to take a subway to the port at Pireaus in prep for our early ferry the next day.  It was tiring.  Luckily I booked a cheap crappy hotel right around the corner from the train station and the ferry dock.  We were there less than 7 hours and even slept in our clothes.  I didn’t even shower, finally sleeping around 1am. 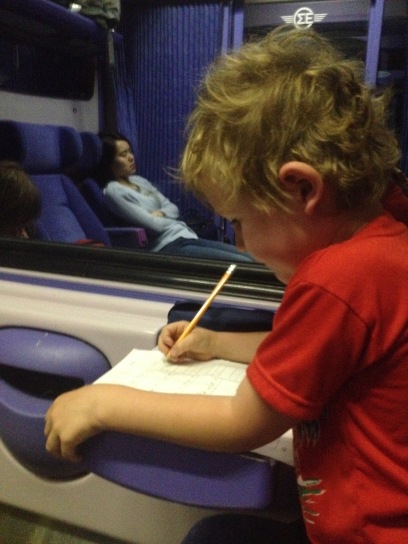 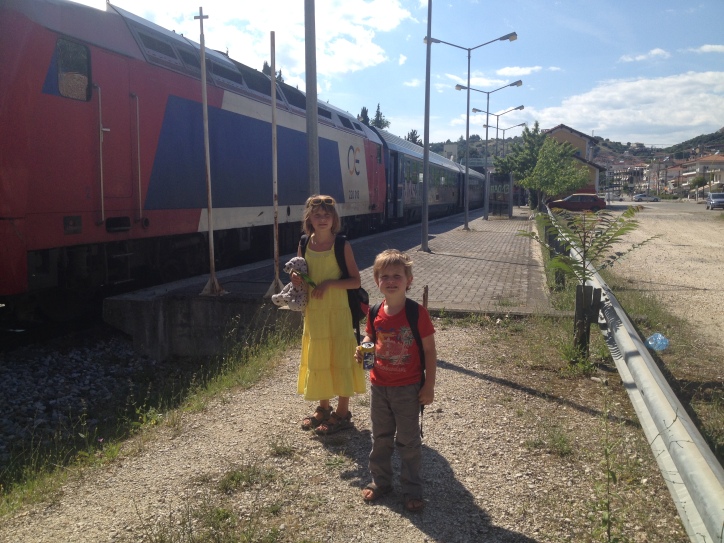