It has been hot, super hot, 104 or more, for months, and though I escaped the hottest part of the summer with our big road trip, being hot this last month has been enough to make us all ready for a reprieve. Don’t get me wrong; we love the sun and blue skies and daily dip in the pool, but, a few days up in the mountains sounds like heaven. So, over Labor Day weekend we drove above the Mogollon rim.East central Arizona rises along a fairly dramatic escarpment called the Mogollon rim, so we did a lot of driving UP from the south. The elevation quickly changes the environment from desert to mountain forest, and that is what we needed!

We drove part way to the rim on Friday night after Avi’s BMX race and found a little parking spot off the road to sleep in the camper for the night. We love having a small drive camper so we can just pull over when the place suits; no setup needed. In the morning we finished the drive up into the White Mountains – an area of the Apache-Sitgreaves National Forest that straddles the Apache reservation and the public lands that run to the New Mexico border.

This area has some beautifully cool forest with plenty of free dispersed camping spots along the numerous dirt roads. It’s fun to explore! At first, the spots were pretty full around Big Lake, but we eventually found a place to park south of the lake on a rougher less-used dirt road. Bryan is an excellent off-road driver, even in a 24 ft camper.

Hopping out of the vehicle into the cool mountain air felt like my soul was finally breathing again. We putzed around, built up the fire ring and made a fire. Zoe spent a couple hours creating an amazing fairy house. Avi played some games. Bryan napped. It was just what we needed.

In the morning we made our way along dirt route 25 and then north onto 276 and the East fork of the Black river. Though a bit more crowded, there were still plenty of camping and fishing spots along the way. We picked one, and relished in the sunshine and cool water. We caught crayfish and minnows. The kids played in the water, and we picnicked like champs. 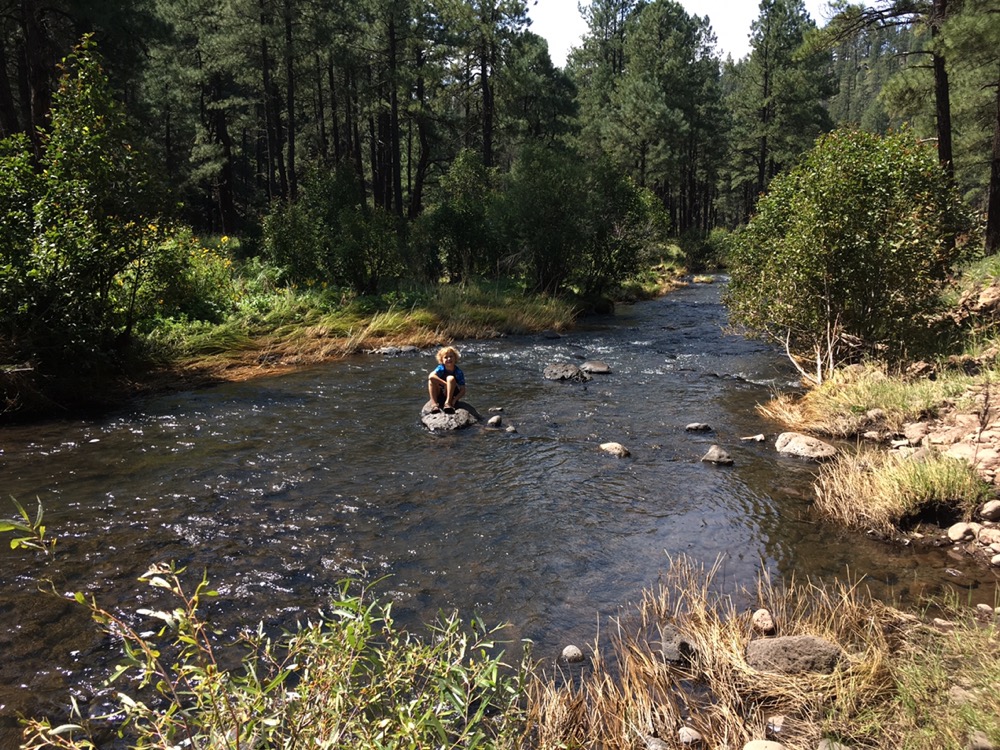 Later in the weekend, we traveled westward to the Tonto National Forest on the other side of the Apache Reservation (there are a lot of beautiful places to camp and recreate on the reservation, but we were in the mood for winging it – the reservation requires permits and a tiny bit of planning). The Tonto has fewer lakes and rivers, but is still wonderfully cool. But, it hasn’t appeared to be as affected by recent wild fire.

We found a spacious dispersed camping spot along a dirt road near Potato lake north of the Rim road – route 300. Avi built another ripping fire, we roasted the marshmallows, and waited for rain. Avi loves being outside with a project to work on. When tasked with finding wood or monitoring the fire, he is in his element.

Zoe picked some very pretty wild flowers until we had a wonderful little bouquet. She is so adept at occupying herself in the woods; it seems her natural environment. She will wander and explore, climb all over stuff, and build forts out of sticks. 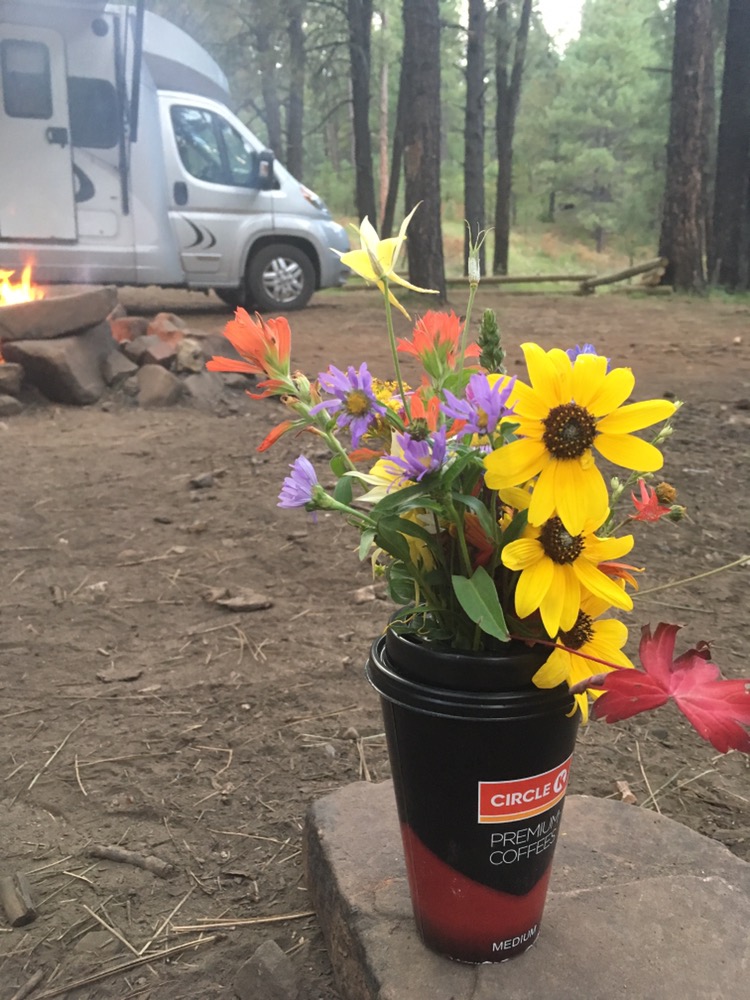 Eventually, the rain came, but lightly, so we stayed out and read by the fire. Bryan made tacos for dinner, and I finished reading Little Women which is such a relief – it is looooong. 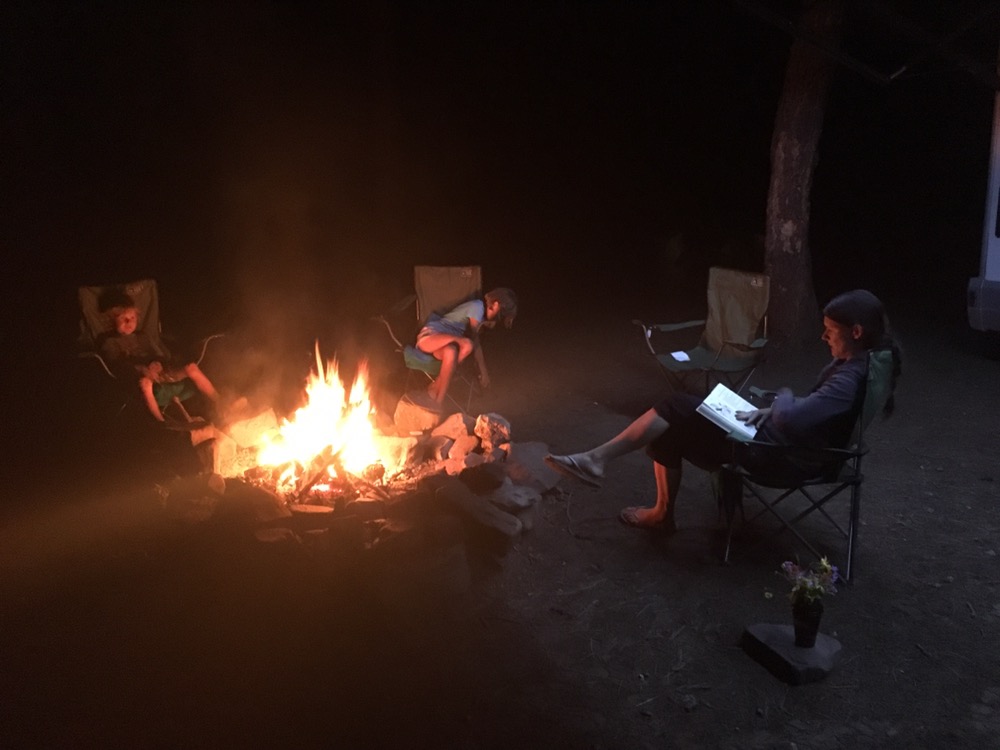 While enjoying a coffee and some Cyndi Lauper (Avi’s favorite), we heard a bit of howling and opened the door to hear a huge pack of coyotes howling and yipping just over the hill. They must’ve been having a gathering, and a quite healthy looking coyote crossed in front of the camper to join them. Then. Our the other side we saw a big gaggle of turkey, and a pretty little squirrel get attacked (and escape) a falcon. Eventful morning!

Thanks to the central uplands of Arizona for refreshing us and being a great escape from the Sonoran desert.